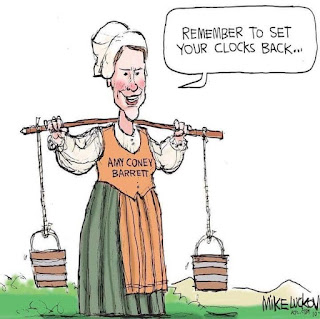 It's a weird day in America!

Then, around 1AM this morning on the 2nd, the White House announced that Trump and the First Lady were both diagnosed with the virus.

Later in the morning it was reported that both POTUS and FLOTUS were suffering symptoms from Covid.

And late this afternoon Trump had been given an experimental "cocktail" to treat his illness, and only minutes later was rushed by helicopter to Walter Reed. Supposedly for observation.

Meanwhile, he hasn't tweeted at all today other than several neutral-toned messages that were probably authored by his advisors.

By this time tomorrow I'm worried that President Pence will have taken the oath of office to become the 46th President of the United States of America.