Yes, it's time for yet another Sunday Night Music Club installment. This week, it's The Church and their 1988 song "Under the Milky Way".

This song has long been sort of in the background of my consciousness, ever since it received fairly substantial airplay in the late 80s/early 90s. The melody and lyrics evokes in me images of everyday life unfolding under a canopy of nighttime stars. It's one of those songs that just seems to flow seamlessly from beginning to end, and all too soon is over.

The Wikipedia page for this song describes how the haunting instrumental break that sounds much like bagpipes is actually "composed with an EBow on a Fender Jazzmaster, and recorded on a Synclavier..."

Huh. Interesting. The shit you can learn on the internet, right?

Anyway, my fondness for the song grew exponentially when it was used to great effect in the 2001 film "Donnie Darko", which is firmly in my Top 100 list of favorite films.

Someday I'll actually have to put together that list. It'll be a fun project for a theoretical time when I have nothing else pressing for a week or so.

Is is wrong that I find this amusing? 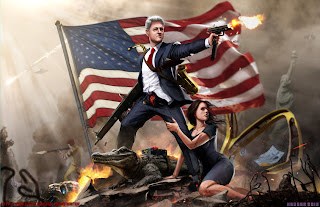 I am a big Bill Clinton fan.

Sure, there's a few things he did that I'm not crazy about...

Like repealing Glass–Steagall, which precipitated the gigantic economic upheaval we've been forced to deal with for the last half decade...

But still, Clinton was the original rock-star president, and I prefer to think of him as a larger than life action hero sort of guy.

So some creatively insane wacko came up with this pitch-perfect tribute to Big Dog, my favorite past president! Even arch-conservative Stephen Colbert would be pleased by this.