The KGB Spy and me

So I was in Washington DC this week to celebrate my birthday and to have an excuse for Joyce & me to get away for a few days, and we got tickets to a really cool event.

"Really cool" if you're as geeky as I am about spy stuff and cold war thrillers, that is. 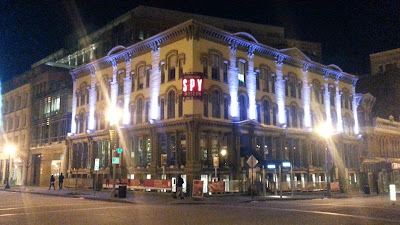 The International Spy Museum hosted a free preview screening of the new NBC spy series Allegiance, which airs Thursday, February 5th. The drama is about a family of post Soviet-era Russian spies who live in the U.S. as a sort of inactive sleeper cell. And the producers insist it's absolutely nothing like that other series "The Americans" (unless you've seen it; then there are some striking similarities). 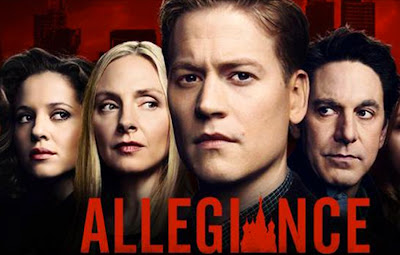 The had a nice reception in the lobby of the museum, with appetizers and free drinks. We positioned ourselves near the hallway where the servers came out with their trays of goodies, so we had first dibs from each tray that was carried by; yes, I'm sneaky that way!

We struck up a conversation with a woman who turned out to be a blogger. She runs a lifestyle and entertainment blog called The Bobby Pen (thebobbypen.com). Then, a guy came up to us and joined the conversation. It turns out he was also a blogger! I guess we just sort of gravitate toward each other. His is an entertainment blog called The Rogers Review (therogersreview.com).

My biggest question for them is how do they manage to successfully monetize their blogs, while I'm still doing it pro bono?

The answer being, probably, is mostly my inherent laziness but also a desire to keep my amateur standing as a hack writer and journalistic dilettante. If I started doing this for money, I'd probably have to work at it! Fuck that!!!

One of the bartenders looked eerily like Sean Connery; so much so that I mentioned it to the people I was with and they agreed with me. I was going to order a vodka martini, shaken not stirred, but I was afraid he'd hit me. So I had a beer instead. I wish I'd snapped a photo of him though. He looks just like this guy: 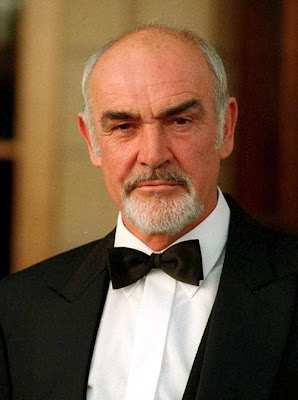 I took the drinks back to Joyce, but just then they announced they were seating for the screening, and no drinks were allowed. Joyce said "There's no way I can finish this," and she took a sip and put her wine glass on a nearby table. I hefted my glass filled with ice-cold Heineken, and after a moment's hesitation, I slammed it down in two healthy gulps. I clunked the empty glass on the table and said "Just like when I was in high school!" A security guard nearby laughed and slapped me on the back as I climbed the stairs. Nothing like a little liquid courage in the tank for what came later!

So the screened the show and it was pretty much what they said it would be. I'll probably watch it when it airs (I'm really not a very good reviewer most of the time). After the screening they had a panel discussion, featuring Peter Earnest, former CIA operative & SPY Museum Executive Director, Oleg Kalugin, former KGB clandestine operative, and Mark Stout, former CIA intelligence analyst. 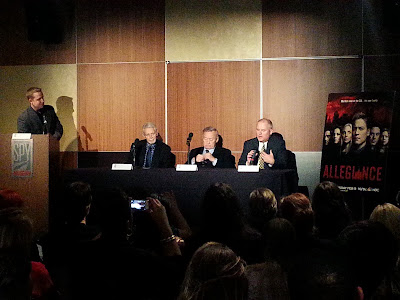 The two former CIA officers (one of them looked and sounded exactly like Hal Holbrook) had some interesting things to say. But Oleg Kalugin stole the show with his stories and observations. There was a moment early in the TV show (not really a spoiler here) where they depict an out-of-favor agent being fed into a furnace as punishment for some wrongdoing. Kalugin was asked about that scene, and he answered that they never did anything that intricate to kill someone, and that Polonium was a simpler way to dispatch a troublesome person! It got some knowing laughs, but definitely chilled those who know the case he was referring to.

In case you forgot, about 10 years ago a Russian dissident named Alexander Litvinenko was poisoned with extremely lethal and radioactive Polonium, apparently murdered by former KGB agents working for the Russian government.

Kalugin is the real thing. He's been active in the U.S. during the cold war years, and was a Maj. Gen. in the KGB in charge of Counterintelligence. He's a stone-cold badass of epic proportions, but he was also funny and charming and he told a lot of tales about the old days of Spy v. Spy. He never defected from the USSR; he was fired by the post-Soviet government for criticizing them. Today he's a naturalized U.S. citizen and is frequently critical of Vladimir Putin's government.

I decided I absolutely had to get a photo with this guy!

Immediately after the Q&A ended I walked up to the side of the stage. Some museum handlers were gathering local VIPs for a photo with Kalugin, but I intercepted him just as he stepped off the stage and asked him if it was OK to take a photo with him. Not only did he agree, but he hammed it up a bit as I took the photo! He was making faces at the phone, but I only had time for a quick photo before one of the CIA guys was gonna snap my neck (or I imagined that might happen). I thanked him, shook his hand, and said that his talk was both very interesting and entertaining. 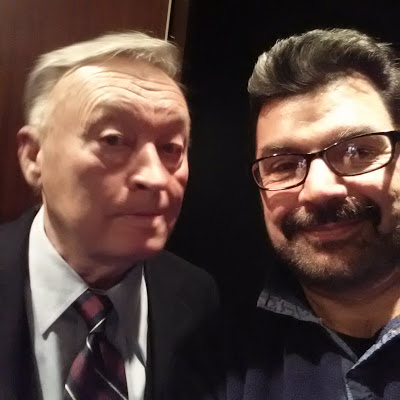 Joyce was impressed that I got the picture so quickly, but after years of blogging and shooting videos, often with politicians who sometimes don't like me much, I've become shameless about getting selfies with people when I want to.

Hey, the worst he could have done was say no, right?

Unless he had an umbrella with a Ricin-filled tip handy. I'm pretty glad I didn't find that out the hard way!