Midway through the third Clinton-Trump debate, this photo appeared on my Twitter feed.

I dunno, but it makes it look like a much warmer, fuzzier debate than what I was hearing! 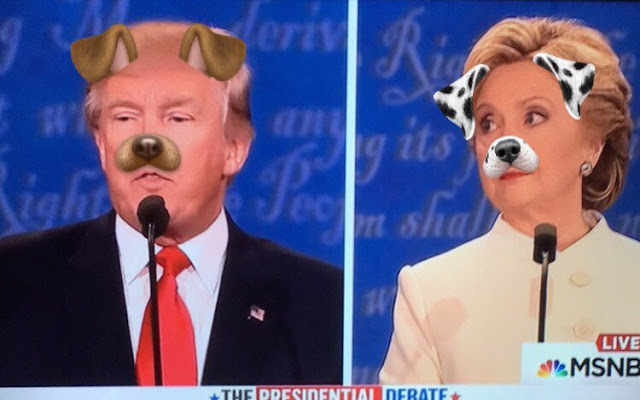 The Death Throes of the Trump Campaign

I'm sorry I haven't been posting much here lately. I've been much more vocal on Twitter and Facebook, but as we approach the Final Days of this horrible shitfest I'll try to be more present here.

It's just 11 days until the big election.

12 days from when the Alt Right starts jamming the internet with calls for Hillary's impeachment.

This has been the most exhausting and contentious election season that I can remember. Every single day there's a new controversy, a new crisis, a new sound bite that rattles the internet like a 6.0 earthquake.

Why is this election so much crazier than previous years?

One: the mainstream media has been working overtime to make a mountain out of EVERY SINGLE molehill this year.

Yes, bros talking about grabbing pussies without consent is always naughty and bad. Yes, the stuff in Hillary's hacked emails is embarrassing and somewhat damning.

But the MSM is trumpeting all this stuff because it's great for ratings, and therefore, great for profits. There has been precious little discussion about the actual issues that face us, because that's boring, and most people (us!) want to hear about alleged 4th degree sexual assaults rather than things that will make a huge impact in our lives.

Two: Trump's raucous campaign has tapped into a large nerve of White America's latent racism. We, as a nation, aren't far enough removed from the 1950s era segregation and all that goes with it to ignore this fact. We've made TREMENDOUS strides in the last 60 years, but we're still basically a nation of people who dislike anyone that's different from us.

Donald Trump has given much of America permission to indulge in this ugliness, through his words and his incivility. Rudeness, discourtesy, bad manners, and boorishness are all hallmarks of Trump's speeches. And through the trickle-down effect, people are becoming more and more impolite.

The upshot of all this is that the Republicans have left the field of respectability and become a party of loud-mouthed assholes. Their embrace of Donald Trump, and all he stands for, have forever tarnished and eroded any moral high ground they believed they possessed. By nominating a vicious child with the emotional warmth of a stone baby, they've sealed their fate.

The GOP is thrashing mindlessly in its terminal agitation. The party is dying.

I can only hope that something more moderate takes its place. Jesus, I never thought I'd be longing for the casual horrendousness of the Reagan-era 1980s!
Posted by CT Bob at 10/28/2016 10:15:00 AM No comments:

During the memorable 2006 Connecticut race for US Senate, the world learned of the power of Youtube and citizen journalism. In late September I was interviewed via phone by "The Guardian", a major UK media outlet, as part of a story looking at Youtube's impact on culture and politics during the days before Google's purchase of the service.

They asked me about how we in Connecticut used video on Youtube to report and influence the election.


In the meantime, one corner of the US was caught up in the first YouTube campaign. In Connecticut, Senator Joe Lieberman - Al Gore's running mate in 2000, and the kind of Democrat who sits so close to the Republicans as to make no difference - was engaged in a bitter fight, built along the faultline of his support for the Iraq war, to regain his party's nomination against Ned Lamont, a more liberally inclined Connecticut businessman who makes his money from cable TV. For Lieberman's tech-minded opponents, YouTube was a gift: they simply poured anti-Lieberman and pro-Lamont footage on to the site, linked the footage to other blogs and websites, and then watched its aftershocks ripple out into the wider world.

Among the most celebrated examples were film of George Bush greeting the senator with what appeared to be a kiss, and TV clips of a long line of conservatives, from Vice-President Dick Cheney to the notorious TV evangelist Pat Robertson, offering Lieberman their support. In addition, there was a steady trickle of clips in which pro-Lamont activists pointed cameras at Lieberman and his aides and asked them testing questions. They played their part in a shock result: Lieberman lost out to his challenger, and is now defending his seat as an independent.

Bob Adams, 47, works as an IT specialist in the Connecticut town of Milford. Over the summer, he devoted a great deal of his spare time to anti-Lieberman film-making, managing to confront the senator (his best shot came with a testy encounter about donations from Wal-Mart), and posting about 50 clips to YouTube. "This is another option for people who want to see what's really going on," he says. "And it's a very democratic thing: anyone with a video camera and a computer can get the same shots CNN can get. If you want people to hear your voice, you put up a video, and you're out there. Political reporters have all that 'You're off the bus' stuff to worry about; if they're denied access by the parties, they're going to starve. With someone like me, I don't have that much to lose. If I had to stop doing this tomorrow, it wouldn't make much difference to my life, except I'd have a lot more time to spend with my wife. So they don't have that power over me."

Ah, memories. Ten years later, the power of online video has become even stronger, while the advent of social media has nearly eliminated the need for blogs. Much more of our attention is being captured by Twitter and Facebook than by individual blogs.

Which I think ultimately is a good thing, because it gives pretty much everyone a voice, not just those who are technically savvy enough to host a blog.

The downside, of course, is that the immediacy and size limitations remove a lot of the detail and careful editing that you saw in blogs. (Other blogs, not my own...careful editing was often sacrificed on my blog!)
Posted by CT Bob at 10/11/2016 12:34:00 PM No comments:

I can't believe the word "pussy" has become a topic of discussion across the nation!

Every time I think I have an understanding of Donald Trump, something else he's done obliterates it and I have to start all over.

This time, at least it's kind of funny. In a tragic, end-of-the-world kinda way should he win. But he won't win. Not now. Not ever.

He'll be lucky to stay out of jail after this is all over. The Trump name, which used to be synonymous with luxury, is forever tarnished and will live on as a running gag on late night TV for years to come.

In case you've been in a coma, here's the video and comments by "The Young Turks".