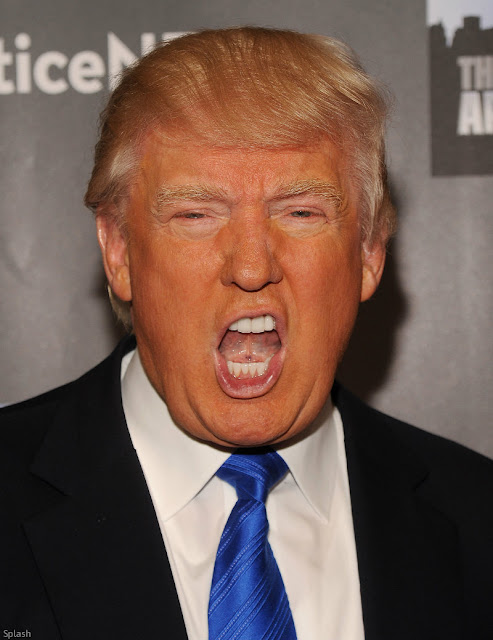 This weekend the approval ratings for Cadet Bone Spurs (Donald J. Trump) matched his all-time low of 35%, erasing the minor bump he got from not shitting himself during his first State of the Union address several weeks ago.

Maybe it's that thing where he refuses to push anything substantive to stop the senseless school massacres that are happening more and more frequently.

Maybe it's the fact that his need to have Cliff's Notes clutched in his tiny little hand when speaking to survivors of the school shooting makes it look like he's emotionally incapable of showing any human empathy at all.

Maybe it's his incessant tweeting his every thought like a gossipy high school girl every single day.

Or maybe, just maybe, it's the realization that the web of his lawlessness is finally tightening around him.

Yeah, that ol' wife-beating thing may play well with your redneck base, Mr. Trump, but the majority of Americans tend to look down on that sort of behavior. 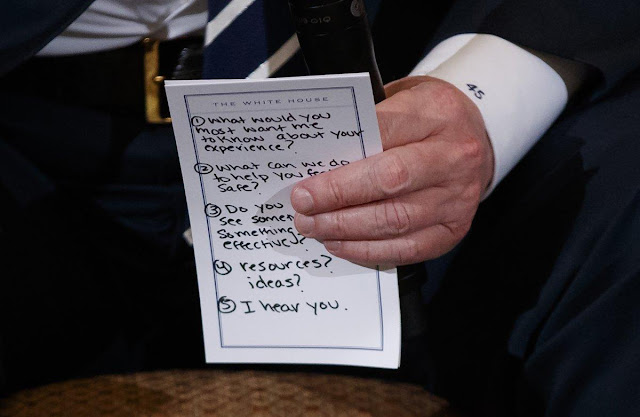 Jesus motherfucking Christ! How much of a sociopath is our president that he needs "talking points" clutched in his tiny baby hands so he can pretend to relate to school students who just saw a bunch of their friends pointlessly gunned down?

I expect to see more sympathy from Patrick Bateman or M.E. Thomas than from our psychopathic president!
Posted by CT Bob at 2/21/2018 09:45:00 PM No comments:

The Russians are coming 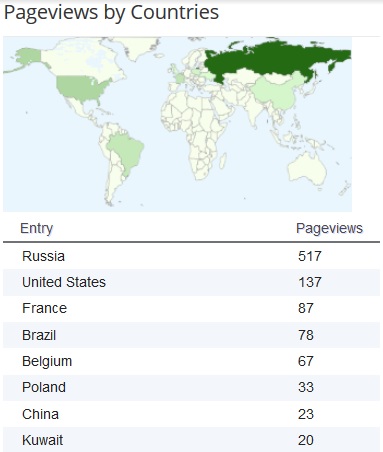 I'm not sure what this means, but it doesn't smell good.

Suddenly my stupid little blog is getting a lot of hits from websites in Russia.

Maybe I triggered an algorithm because of all my references to Donald Trump being a "dick".

But that's mostly on Twitter, and I don't publish them here except on the side bar. Maybe I'll start linking my Twitter to this blog just to get my publishing numbers up.

Anyway, those Czarist fuckers are somehow messing with my blog. And I think it might be not a good thing.

But what the hell...who cares? I can delete the whole fucking thing tomorrow and I wouldn't have an ounce of regret.

A Simple Way To End The Gun Debate 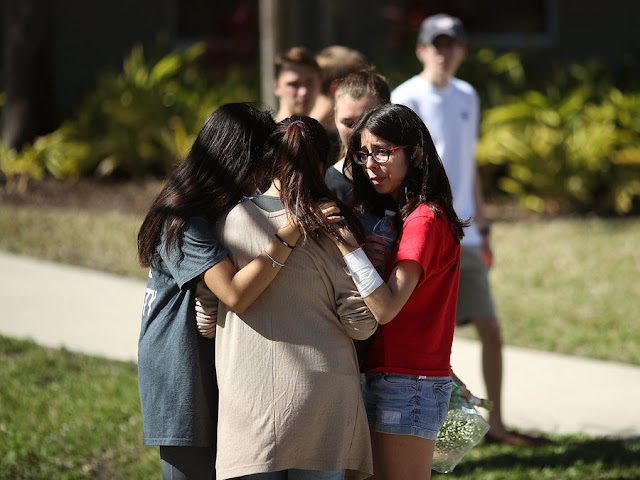 Every time there's one of these senseless massacres, I tweet the same goddamned thing:

Just think of how the public would respond to seeing actual photographs of the children with their heads blown off.

With their little chests ripped apart by military rounds.

With their faces frozen into absolute horror as they died in an obscene frenzy of violence.

The idea of it is horrifying!

And yes, it would have an immediate effect on the national discussion over gun control!

One of the ways gun supporters and the NRA have gotten so many politicians to vote for absolute free and nearly unfettered access to military-grade weapons is because the images we see in media are whitewashed of any of those things.

Imagine for an instant what the unified public reaction to images of the Parkland dead or the Newtown victims being shown as they lay in their classrooms; their lives torn from them because as a nation we can't seem to comprehend what most of the world easily knows.

Look at Australia. They suffered a horrific massacre in Port Arthur, where 35 people were killed in a senseless gun attack. This resulted in the National Firearms Programme Implementation Act 1996, restricting the private ownership of semi-automatic rifles, semi-automatic shotguns and pump-action shotguns as well as introducing uniform firearms licensing. It was implemented with bipartisan support by the Commonwealth, states and territories.

They worked together on passing this legislation.

It put an immediate end to this kind of tragedy.

For over 20 years, Australians have enjoyed the relative freedom of not being shot whilst going about their business, at least making gun violence as rare as, I dunno, being struck by lightning or choking to death on a kangaroo steak. (I actually don't know the odds of either of those two possibilities, but I expect they're quite remote, as is the possibility of those little kids from down under being gunned down in 3rd grade mathematics!)

So, what's it going to take to get the gun-toting NRA supporters to see the results of their fascination with military-grade weaponry?

One, is for some of the parents of murdered children to publicly call for the release of the photos of their dead child, in order to perhaps make some sense of their deaths. It would be difficult for sure. But then again, I've seen enough interviews with bereaved parents to know that there are some who are so angry they would absolutely want to share the horrible photos of the crime scene in the hope that it will possibly result in effective gun legislation. And it might give them some comfort that their child's death has some meaning in preventing future attacks.

The other is for some law-enforcement or government employee who has had enough of seeing those photos as a requirement of their job to take a leap of faith and leak the photos to someone who has the cajones to release them into the public eye. A thumb drive plugged into the right USB port on the right computer for a minute or so may save countless kids from future attacks. (I would totally be willing to take the hit for releasing data like that, especially if it results in legislation that saves lives.)

This will have the immediate effect of getting the obscene reality of these killings into the minds of every single NRA-sponsored Congressman or Senator. And in the minds of the voters who will decide if they should continue to support them.

And then, those legislators will have to answer horribly awkward questions from EVERYONE about why they aren't doing ANYTHING about stopping this epidemic of gun-caused violence!

The world will change just a little bit, in that instant.

And sometimes, all it takes for history to change is just one, small, courageous step.

This could be that step!

When the mid-terms get really ramped up in the fall, Donald Trump will manufacture a reason to go to war with somebody, as he's already said that a war will be good for the Republicans.

Imagine if these photos were released two weeks before the election!

Every SINGLE legislator who took money from the NRA will be spending a lot more time at home.

The Latest School Massacre, brought to you by the NRA

God have mercy on your NRA-kept souls:

Ned Lamont back in Governor's race

After an eight-year hiatus from active political campaigning, our old friend Ned Lamont has jumped into the race for the soon-to-be-vacant seat of retiring Governor Dan Malloy.

The state is facing a fiscal crisis not too different from the one Malloy inherited from former gov. Jodi Rell eight years ago. The State Senate is dangerously close to the Democrats losing control unless there is a significant outpouring of Dem voters.

So, we're here now with Lamont back in the race. He's probably the candidate with the most name recognition from his past efforts, although there so far isn't a stand-out candidate in the race as far as I can tell. Things can change quickly though; current Comptroller Kevin Lembo was my early choice for the seat, but he bowed out while still in the exploratory phase. Lamont has apparently hastened from exploring to full-fledged candidate in a matter of weeks, as a result of polling he commissioned.

I do not doubt that those numbers showed promise!

So far I haven't see a lot of detailed policy issues discussed, other than general calls for more jobs, better infrastructure, lower health-care costs, etc. He has as recently as yesterday (Jan. 31st) come out in full support of Malloy's plan to add tolls to the highways as a way to generate more income.

It's a plan that's not very popular with the voters, and perhaps Ned would like to see it go through under Dan's watch so he can avoid taking the heat for it.

Then again, Ned has often taken the less-popular stance because he felt it was the right thing to do. We can always use leaders who make decisions with that in mind.

I tend to think that we do need tolls, as unpleasant as it sounds. It's a another form of a tax, but it's a "use" tax, where only the people who use the roads will be liable for it. And with a smart plan that uses the very best ideas other states have in their successful programs, it can be made virtually painless for state residents, while passing a large portion of the costs to out-of-state drivers and especially trucks that pass through Connecticut. A sliding rush-hour scale may encourage more commuters to use public transit, reducing the traffic on overburdened stretches like I-95 between Bridgeport and Stamford. This revenue will be used for projects like widening I-95 where the traffic has the worst bottlenecks.

Of course, there are plenty of issues besides tolls that come to mind. You can look at Ned's website and read up on his various ideas as he posts them, at NedLamont.com.
Posted by CT Bob at 2/01/2018 04:26:00 PM No comments: