Former House Speaker Dennis Hastert was indicted yesterday for allegedly trying to conceal around $3.5 million in "hush money" to an unknown person who was threatening to expose something obviously hideous and probably disgusting about him. 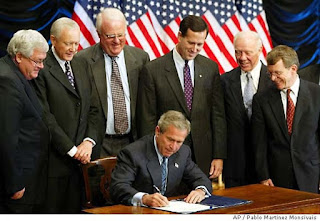 (Dennis Hastert on left as Bush signs bill)
Hastert was instrumental is helping pass a bill that George W. Bush gleefully signed into law that restricted the rights of women to seek a certain type of abortion. This was just a step in the direction of stripping those rights entirely from women.

Karma can often be a bitch, and something tells me that she's mad as hell and is gonna land a big fucking hammer on ol' Denny's head.

I'll watch for updates, and will likely post them here. Gleefully.

UPDATE: I can't resist posting my video of Joe "Bush's Lapdog" Lieberman lying to my face about Dennis Hastert covering up the investigation of Mark Foley's "misconduct" with some young Congressional pages and their naughty bits, as it eventually was proven.