The Connecticut Democratic Party recently decided to drop two of the names on it's biggest annual fundraising event, the Jefferson Jackson Bailey Dinner, or the "JJB" in common parlance.

Thomas Jefferson was a slave owner, and he also (let's face it) repeatedly raped at least one of his slaves (because consent cannot be given when someone is incarcerated or directly under complete control of another).

Andrew Jackson worked against the abolitionists and sided with the South on the issue of slavery, along with being responsible for the slaughter of countless Native Americans.

So that leaves state political operative John Moran Bailey as the only remaining name currently attached to Connecticut's Democratic dinner. I don't know if he did anything wrong, but I'd be willing to bet he doesn't approach the other two in notoriety.

I don't have much of an opinion either way about the name change. I guess I'm in favor of acknowledging the wrongful acts they committed, and if part of that acknowledgment means their names being dropped from the dinner, I'm fine with it.

But in all the articles I've read about this topic, there's one name that hasn't really come up. This person of course isn't named in the JJB, but he has always been honored and revered in this country since it was founded.

The Father of our Country.

And, a person who owned slaves. At times, well over 100 slaves.

If we are seriously discussing scrubbing Jefferson and Jackson's name off of high-profile political events, shouldn't we also take a closer look at George's dealings in the slave trade?

There are apologists for Washington and Jefferson, who say that they were simply citizens of their time, and they were born into a society where is was considered acceptable for a wealthy landowner to own slaves.

True, Washington was the only founding father who freed his slaves upon his death, he attempted to keep slave families together, and he agonized over the issue of slavery.

While still owning and working his slaves.

Sounds like a bit of a disconnect there, right?

Then again, when one of the slaves, Oney Judge, a personal attendant to Martha, escaped to the north, ol' George didn't hesitate to send agents to attempt to capture her and return her to slavery. By the way, there's an episode of Drunk History where comic Jen Kirkman hilariously narrates the Oney Judge story after drinking too much wine.

The point I'm making is, why hasn't anyone brought up the discussion that George Washington was just as guilty of the crime of slavery as Jefferson?

The answer, I think, is because Washington enjoys a status far above any other other person in American history. He is simultaneously a great leader, a hallowed saint, and a true visionary. He essentially IS the American ideal. But he also owned slaves. It would be very uncomfortable for everyone to start a conversation along those lines.

It is inevitable that this will become a topic that will have to be addressed.

What a bunch of dopes

I really wanted to title this post "What A Bunch Of Colossal Assholes", but I figured the NSFW headline might appear on people's news feeds, and I didn't want anyone to have an issue at work.

House Republican leadership pulled the fiscal year 2016 Department of Interior, Environment, and Related Agencies Appropriations bill from the floor after several members voiced opposition to an amendment that would have allowed Confederate flag paraphernalia to be sold at national parks and displayed on graves at National Park Service-run cemeteries.

Once again, the Republicans are stopping progress on a necessary bill for bullshit politicking and lame posturing.

I can only hope that voters in the 2016 election will take the power out of these destructive idiot's hands and allow the adults to run the country for a while.
Posted by CT Bob at 7/12/2015 10:57:00 AM No comments:

Former House Speaker James Amann has recently announced his resignation from the Milford Democratic Town Committee. He was on the DTC for 33 years, and even though he reportedly hasn't attended any meetings since his abortive 2010 run for Governor, he feels that he needs to step down and allow others to lead.

Yes, I'm fully aware of the irony in that last sentence.

Which is long for "lobbying firm". 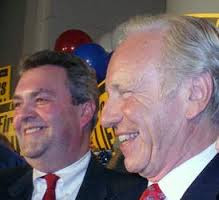 Jim Amann in happier times
I'm speculating that he stepped down because his firm likely "consults" with members of various political parties, and he probably doesn't want to look biased by being a current member of the DTC.

Which is fine with me, more power to him. He's certainly entitled to all the success he can get.

Full disclosure (although why I think it's necessary, I don't know): I've been a mostly non-involved member of the Milford DTC for several years, although I still do proudly display lawn signs for our party's candidates every fall.
Posted by CT Bob at 7/11/2015 11:28:00 AM No comments: