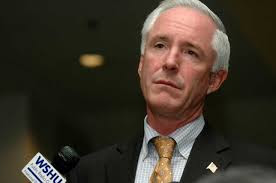 Earlier this week Secretary of State Denise Merrill ruled that Bridgeport mayor Bill Finch was not eligible for a ballot spot with the "Job Creation Party" because they didn't meet the September 2nd deadline to submit a letter of endorsement for their candidate.

In other words, in order for Finch to appear on the November ballot, the party would have had to endorse him in writing before the September 16th mayoral primary.

This is a requirement that was likely put in effect some time after the 2006 Senate race here in Connecticut, when Sen. Joe Lieberman was allowed to register as an independent candidate AFTER losing the primary election. Drawing nearly 70% of the Republican vote due to the Connecticut Republican Party refusing to campaign for their endorsed candidate Alan Schlesinger (and thusly reaching an apogee of hypocrisy not matched since) Lieberman rode to a decisive win in the general election over Democratic upstart candidate Ned Lamont. Schlesinger only received about 10% of the popular vote, which is completely unheard of in Connecticut history. Even that piece of shit Philip Giordano got about a third of the vote in the 2000 senate race. So for the Republicans to turn their back on their own candidate in 2006 was totally unprecedented.

And then Lieberman went on to inflict as much damage to the Democratic party as possible when he spent all of 2008 vigorously campaigning for John McCain and criticizing Barack Obama.

And now, they do.

I think it's reprehensible that a felon convicted of corruption won the mayoral primary. But the voters in Bridgeport made their choice. And losing fair and square is a thing. Finch lost fair and square. He should step back, admit defeat, and work on winning his next contest.

GOPers exercising their right to be idiots

In yet another round of colossal stupidity, Senate Republicans have again tried to block President Obama's Iran nuclear deal.

Sen. Mitch McConnell, the Republican majority leader, had called for a second vote despite protests from Democrats that it was a waste of time!

The Dems have a solid block of 42 senators, which is enough to prevent a vote on the deal. Yes, Senate Democrats have learned the lessons of our stonewalling Republican brothers very well! But rather than simply accepting defeat on this matter and moving on to, you know, legislating important shit, McConnell is stubbornly and mindlessly flogging a horse that's not only dead, but also attracting flies and vultures!

Still, with next year's election already looming large in the puny little minds of fearful Republicans, they continue to grandstand and waste valuable time on an issue that's already been settled.

Hey guys, how about you set up another vote on Obamacare?

10:30 AM; in 30 minutes Sen. Richard Blumenthal will announce his support or opposition to the Iran nuclear deal.

The Democrats already have the votes to prevent a challenge. His vote essentially means nothing.

I hope he sides against it.

At least that way, he won't look like a bandwagon jumper, who safely decided to vote AFTER the deal was settled.

11:10 AM; he decided to support it. When I clicked on his link to the press release to explain his reasoning, it came up to a blank page. His website has a sense of irony.

The thing is, he could have supported it weeks ago when it would have done some good. By waiting until there were enough Senate votes to prevent an override, his support means almost nothing. If they get a few more votes, they can prevent the need for a veto, but regardless, a vote of support earlier would have carried much more weight. Slightly disappointing.