I always thought Texas was the de facto owner of the "Wackiest State in the Union" crown, but once again Florida has shown why it's the only state to have it's own tag on Fark.com.

The Floridian Republican Party has "gone rogue" on the RNC and will likely decide they're going to hold their primary on January 31st, and screw them if they don't like it!

This will likely have the effect of once again causing a rush for states to "front-load" their primary dates under the premise that the earlier their election is held, the more influence their results have on the eventual nominee selection.

Problem is, you end up with 38 states having their primaries over a 6-week period, and the candidates have to pick and choose which states to visit and actually connect with the voters. The vast majority of voters will have zero opportunity to hear their candidate speak (other than the 10- to 20-second carefully selected sound bites on whichever media outlet they watch) and will make their choices based on whatever fragments of truth managed to trickle down through the dense layers of corporate media spin and land somewhere south of their frontal lobes.

Connecticut was "lucky" in 2008, with both Barack Obama and John McCain visiting the state in the hours preceding the February 5th primary. Both candidates indeed won in Connecticut, so there's something to be said about actually showing up in a primary state and having time to connect with the voters.

(Oh, and Sen. Joe Lieberman is still a treacherous scumbag and a cheap Republican shill for embracing GOP puppet John McCain on that stage in Fairfield during that ridiculously over-produced spectacle. I just wanted to acknowledge that because we won't have Joe Lieberman to kick around forever now, will we?)

But there were about 20 states who held primaries on that same date, and I doubt even in this age of personal jetpacks and flying cars (what? we don't even have those yet?) it was impossible for the candidates to properly speak to the residents of all those states.

So in an ongoing effort to stem the stampede of front-loading, both the Republican and Democratic national leaders have created rules to space out the primaries and both give the candidates the proper amount of time to campaign and also allow the race to progress in an orderly fashion where the better person is more likely to rise to the top. (not a guarantee by any means)

According to the RNC rules, any state which moves it's primary before March 6th (with the exception of the first four "carve-out" states -- Iowa, New Hampshire, Nevada and South Carolina) will lose half it's designated delegates at the national convention.

But sometime on Friday it's very likely that Florida will disregard this threat and go ahead and schedule their primary early. And a result will be a similar stampede to the front that will wreak havoc over the carefully designed schedule and end up short-changing the voters from seeing their candidates. Sometimes a revolution bursts into existence in the proverbial blink of an eye, often the result of a cataclysmic event or a dramatic incident.

This ain't one of those revolutions.

The Occupy Wall Street movement began just over a week ago. The concept being that a diverse crowd gather together in a nearby park and peacefully protest the way our government is in bed with Wall Street concerns. The ideo is for these protests to last for several months. The economic forces that have led to this protest have been building for years.

Some heavy-handed police involvement led to the arrests of roughly 80 of the peaceful protesters over the weekend. It also led to an unprovoked pepper spray assault on some peaceful individuals who were being detained. The video is both horrifying and infuriating:

I was just asked to accompany someone down to NYC tomorrow to shoot some video at the protest site. The idea was tempting, but I had already committed to doing a day's work on a film being shot up in the Litchfield area.

...where there's very little chance of me getting pepper sprayed.

(Well, unless the Assistant Director turns out to be a real dick!)

Anyway, here's a link to a website that has more info and videos from the protests, and they also explain in much better detail than I can about what actually is the purpose of this protest. Visit OccupyWallSt.org to read more. And use the #OccupyWallSt hashtag to follow developments on Twitter.

This isn't one of those instant revolutions. It took a long time for the country to get into the mess we're in, and the protest needs to keep gaining momentum before we'll see any significant change for the better.
Posted by CT Bob at 9/26/2011 02:57:00 PM 3 comments:

Punk movie classic "Repo Man" is currently viewable on Youtube, although I doubt that it will remain there for long. The 1984 sci-fi punk masterpiece, written and directed by Alan Cox, holds up remarkably well over 25 years later.

I haven't seen the low-rated 2009 reboot "Repo Chick" by Cox but, much like I forced myself to watch the similarly poorly reviewed ripoff sequel to "Donnie Darko" entitled "S. Darko" (and yeah, it basically sucked), I'll probably watch the newer Repo flick. If just to hope I see some flashes of the genius contained in the original.

But for now, you should watch and enjoy this intense low-budget 80s punk cult classic, starring Emilio Estevez and Harry Dean Stanton.

...because, the life of a repo man is always intense!

The video is in two parts, and the entire debate is over 102 minutes long. Maybe next time they can eliminate some of the rebuttal opportunities to speed the thing up. They each answered the question and then they each answered it again.

If they really needed to rebut something someone said, they probably could've used a few moments out of their next question to say it. I don't mean to complain or anything, but it was getting a little difficult to stay awake towards the end. Coffee would have helped. I bet the church would have made a killing by selling coffee at a buck a cup! Let's see if we can get rid of that endlessly redundant rebuttal stuff, please.

Has it been two years since she previously announced? Predictable, yet nauseating.

World wrestling billionaire Linda McMahon has thrown her hat into the political ring once again, in what it likely to be another well-funded attempt to become the junior senator from Connecticut.

There are, however, several positives to this silly development. First, she'll spend another $50-75 million dollars in her doomed adventure, which will hopefully stimulate our local economy; assuming she hires local businesses for her campaign...(or even independent contractors, like out-of-work political bloggers and videographers. Hey, don't you all look at me like that; I need a goddamned job!)

Next, we already have a wealth of material to draw upon from her previous foray into the political arena. I mean, just look at this video:

It's already too easy to criticize this person for the way she made her money. But I'm sure there are plenty of other reasons we'll discuss in the future why she'll make a horrendous senator if somehow she manages to get nominated.

In the meantime, here's a video I made last year of her "triumphant" Milford rally which, after our Republican Mayor had all the trees on the City Hall lawn pruned to within an inch of their lives so as not to block anyone's view of Ms. McMahon, was attended by a scant 200 or so people (not counting the hundred or so invited guests on the steps who were associated with Linda's campaign):

It was an embarrassingly small turnout for a hugely publicized rally held on a perfect Saturday afternoon. But, I guess all her money can't buy her credibility with the voters. 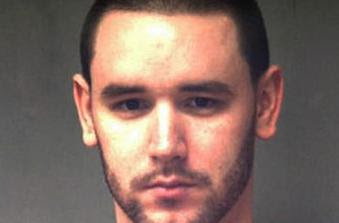 We had the wrap party for our movie "Isn't It Delicious?" last night, and while there we also celebrated the 80th birthday of the inimitable Malachy McCourt (who plays "Father Bob" in the movie). 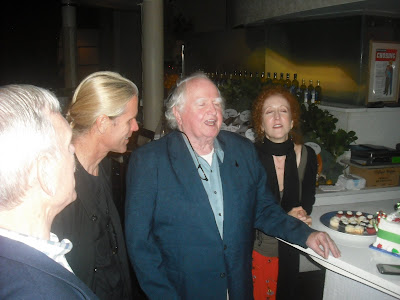 Malachy led the crowd in a rousing Irish sing-a-long, then gave what is probably the best advice I'd ever heard:

"Live each day as if you think it will be your last, because one day you'll be right!"