Day after Christmas. I've already seen "The Interview" and gotten a really cool gift from CT Joyce, so all is well with the world.

My gift was a tiny drone with video capabilities. The thing is about four inches square, powered by four little DC motors, and sporting flashing LEDs and a video transmitter. 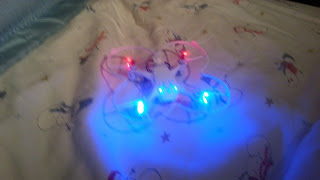 Since yesterday I was practicing flying it in the safe confines of my home. I started getting good at controlling it and about half the time I was able to land it back in the foot-square area I'd flown it from. I figured I had it down pat!

So today I decided to fly it from the ball field over at West Shore Rec Center down by Walnut Beach. I set it up and took off. For a few moments I was looking at the TV screen on the controller that was showing live video from the drone. The controller also recorded the video on an SD memory chip. More on this later.

So far, so good. I was watching the video screen and not paying attention to the fact that the wind was taking the drone eastward at about 10 to 15 mph. When I finally looked back up, it was about 100 feet up and well past the fence around the field and over some houses.

I figured I'd try to fly it back because I was worried if it landed in someone's backyard I might not get to recover it. So I tilted it towards me and applied the throttle. Well, what happened was that it clawed it's way back towards me, but also climbed up several hundred more feet! The wind was stronger there, and it was caught speeding backwards away from me.

It was getting smaller and smaller, and no matter what I did, the tiny motors on this thing were overpowered. The live video feed was getting a lot of static because the range is only 300 feet. I was trying to take a bearing on where it was, because it was almost out of sight and I simply cut the throttle in the hopes it would land somewhere I could find it.

This is one of the last images I received from the drone before the video and control link was cut. I yelled "Fuck!" loudly, because that's what angry boys do when they lose their toys. Then I stomped to my car and drove to where I thought it went down. I got out of the car several blocks away from where I launched and walked through the streets and alleys in that crowded beach district.

After about 20 minutes I gave up and took the controller with the video chip back home. I was so pissed off that I had made a stupid rookie mistake and lost my beloved drone on it's VERY FIRST DAY in the wild! I should have known it wasn't a free-range drone! It had been brought up being hand-fed and unable to fend for itself. I was stupid! Now I was gonna have to tell everyone I already told about it how I had a drone for ONE FUCKING DAY!!!

I stormed into the house and popped the chip into my PC. This was my last chance of ever finding it! I began looking at the final minute of the video. I was CSI-ing the shit outta that footage! It was like watching the Zapruder film...the drone went back and to the left! Back and to the left.

I was looking for landmarks where the drone was just before I lost sight of it. A few frames before the video went gave me some clue. I called up Google satellite maps and zoomed in on the neighborhood. I decided it had landed in an apartment complex that was further downwind than the residential area I was searching.

I parked my car in a visitor's space and began strolling the grounds. I was also looking up at the roofs of the two-story apartments in case it landed on a roof. I'm sure I didn't look suspicious at all to the tenants, not with their children playing in the grassy areas nearby.

I had just about searched all the possible places when I came to the street the farthest east from where I launched. I glanced right and began to walk left, when I suddenly stopped and looked back to the right. 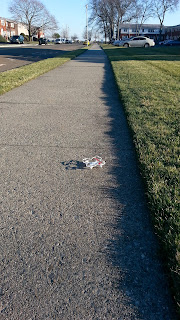 There it was, sitting right on the sidewalk! I'd been looking for it for over an hour, and I'm shocked that somebody didn't already find it in the busy neighborhood.

I went home and Google satellite-mapped the spot it landed, along with the launch point. Here it is: 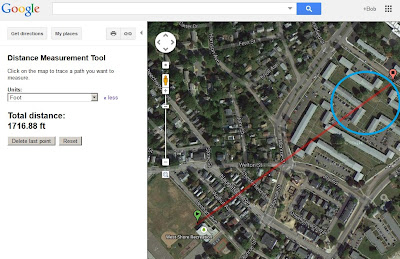 The blue circle is the search area I was looking at, from the aerial images I had right before it cut out. The pin on the right is where I finally found it. This is some CSI-type stuff, right?

It traveled over 1700 feet from where I launched it, and it easily topped 500 feet of altitude. How cool is that? Considering it has a 300' range, this went well past where I thought it would function at all.

So, I've learned a bit about flying the drone outdoors. If it's too breezy to launch a china lantern, then you should probably stay below 50' or so.

I mean, why would you even care if a little movie about your beloved leader getting his head blown off is released? Shit, we have like fifty movies about JFK getting HIS head blown off, and do you see us hacking the fuck out of anybody?