Romney and Santorum will go down to the wire

The headline is what I secretly wish, but more than likely that won't happen.

Of the two GOP primaries yesterday, Michigan had the most interesting results. Romney prevailed in both primaries:

Arizona's all-or-nothing rules means Romney won all 29 delegate, while Michigan split their delegates based on percentages. As of this morning, 8 delegates remain unpledged.

Michigan is interesting because it's widely identified as Romney's birthplace and known as his "second home state". Yet he only barely squeaked by Santorum, who's expected to do reasonably well in next week's "Super Tuesday" election. 10 states will hold primaries and caucuses then, including Massachusetts, which of course is Romney's home state.

The current delegate count is:

So with Romney holding a substantial lead over everyone else it looks like Super Tuesday will be a showdown, and anyone who performs poorly will likely see their financing dry up as their contributors rush to the front runners. Should Romney sweep it, more than likely it will end the race right there.

Of course, Romney is heavily favored to win the nomination, but I'm half-hoping for a spirited challenge from Santorum or Gingrich just so I can see the fireworks continue. 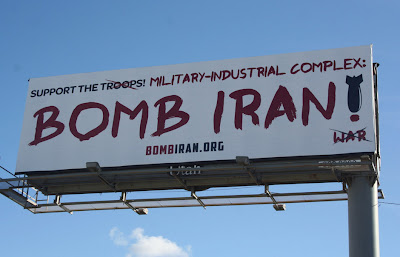 (from BombIran.org - an antiwar site)

The last dying gasp of the aging warhawk was uttered yesterday, when Sen. Joe Lieberman spoke about possibly using military force to stop the shadowy nuclear weapons program in Iran.

Lieberman's stance is predicated on the supposed "capability" of Iran to develop nuclear weapons, not the actual deployment or use of them. Lieberman is a sponsor of a Senate resolution that urges President Obama to...:

...take action to "prevent the Iranian government from acquiring a nuclear weapons capability."

This is sounding very familiar to President George W. Bush's justification for launching the disastrous 2003 Iraq War, which President Obama has finally gotten us out of as of December. Disappointingly, it appears that Sen. Richard Blumenthal has signed onto the resolution.

It's been nearly two months without a new war to take its place, so Lieberman apparently wants to help the military-industrial complex one more time before he retires. A not-too-tidy (or inexpensive) war against Iran would fit the bill perfectly. And the oil companies would use the event to skyrocket the price of fuel. Everyone wins!

The deliberate fuzziness of the word "capability" gives the Senate enough wiggle room to, depending on their political slant at the time, start a war based upon next to no evidence. Just like the "weapons of mass destruction" argument Bush used to launch the war nearly a decade ago.

We must pressure our leaders to keep cooler heads. There will always be perceived threats against our nation, but to act on them unilaterally with no conclusive evidence would be a crime against the principles that our country is based upon.

This is a simple fact: Chris Cornell is one of my favorite musicians of all time.

Well, here's another reason to like him. His soulful tribute to the late Whitney Houston, recorded live a few nights ago in San Francisco. I'm not a big Whitney fan, but it literally gave me chills.

How can you not love this guy?

Sad news today. Hall of Fame catcher Gary Carter passed away at the age of 57.

During the magical 1986 season, CT Joyce and I attended eleven games at Shea Stadium, and the NY Mets won ten of them (it was that kind of year), including NLCS Game 5 when Carter hit a dramatic 12th inning single to score Wally Backman from second base and win the game. The Mets went on to win a memorable World Series against the Red Sox.

There wasn't another player in MLB who matched his exuberance, enthusiasm and hustle. He was a class act all the way. I'm sad that he's gone, but feel privileged to have watched him play the game the way a true champ plays it.

Woman of the (New) Year! 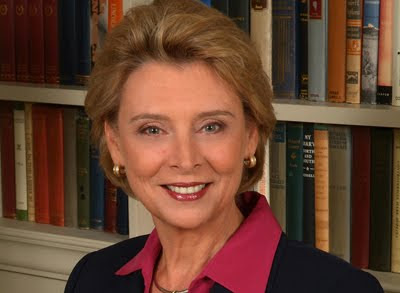 Washington state governor Christine Gregoire has promised to sign the landmark legislation passed by the state senate which will legalize same-sex marriage. 2012 is just over a month old, and here is a person who is making a definite difference already!

Many states have passed laws defining what constitutes marriage, with too many red states making it absolutely verboten between anyone but a man and a woman. The old "defense of marriage" arguments simply doesn't hold water unless those same states really wanted to protect the sanctity of marriage, and that would only be possible if they passed a law that banned divorce!

But the defense of marriage argument is simply something bigoted people use to discriminate against gay people. They don't want gay people to have the same rights as themselves, but rather than embrace their bigotry and openly admit it, they hide behind a veil of religion and self-righteousness.

Meanwhile, pro-Christian conservatives like Newt Gingrich are usually on their second, or third, or even fourth wives. That's not being "pro-marriage" at all...unless you're measuring marriage on a yardstick of how many of them a guy can afford! 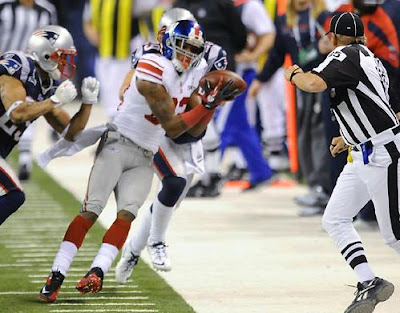 Sorry to all my friends (and CT Joyce) who are New England Patriots fans. I know this won't make you feel much better, but I was saying that if the Giants had to lose to anyone, I was hoping it would be the Patriots.

But the boys in blue (actually, since they were wearing their away uniforms it was red letters on white, which I still despise as a transparent attempt to sell more merchandise) did win it. As I mentioned in Twitter, in this year's postseason the Giants have continued to find ways to win. That's the sign of a real championship team! Congrats to the Giants for their second Super Bowl win in four years.
Posted by CT Bob at 2/05/2012 11:56:00 PM 2 comments: