We made it through the storm

Here's my boat, post-storm. Other than some water in the bilge, it rode out the storm nicely. And we got some tree debris in our yard, but no damage to our house or cars. Our thoughts are with those who suffered damage in the storm.

My dad and CT Joyce's mom still don't have power. Inconvenient, but not a major problem. All things considered, we're pretty lucky. 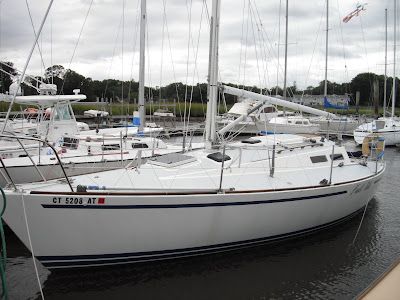 I do. And it looks like we'll see more of the same in a couple days. Be smart and be safe.

Too busy to sail...or blog 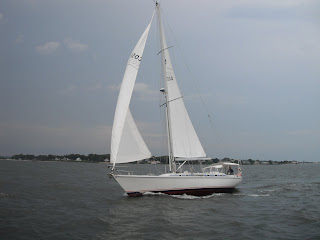 The only time I've been able to get on the water this month was on the chase boat to help film our friends' yacht "Shameles" for the movie. I'm going through an intense case of sailing withdrawal. When this film wraps on the 31st, I'm leaving for a week of sailing with Joyce.
Posted by CT Bob at 8/22/2011 10:15:00 AM 1 comment:

Bachmann rachets up the crazy 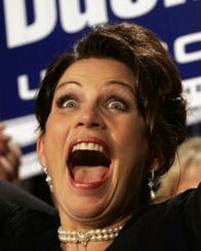 She is God's true gift to the Democrats.

Just when I was beginning to get worried that the Republicans might come up with a frontrunner who is just far enough center to sway moderate voters, up pops Michele with her special brand of wingnut crazy to win the Iowa straw poll.

Some quotes from Michele can give you a clue about her:

''[Pelosi] is committed to her global warming fanaticism to the point where she has said she has even said she is trying to save the planet. We all know that someone did that 2,000 years ago.''
—Rep. Michele Bachmann, Oct. 2008

''What I want them to know is just like, John Wayne was from Waterloo, Iowa. That's the kind of spirit that I have, too.''
—Rep. Michele Bachmann, getting her John Waynes mixed up during an interview after launching her presidential campaign in Waterloo, Iowa, where she grew up. The beloved movie star John Wayne was born in Winterset, Iowa, three hours away. The John Wayne that Waterloo was home to is John Wayne Gacy, a notorious serial killer. (June 27, 2011)

''The President of the United States will be taking a trip over to India that is expected to cost the taxpayers $200 million a day.''
—Rep. Michele Bachmann, grossly exaggerating the expense of Obama's trip, which cost a fraction of that ($200 million is more than the entire war in Afghanistan costs per day), Nov. 3, 2010

''Unfortunately she is now suffering from breast cancer, so keep her in your prayers. This may be an opportunity for her now to be open to some spiritual things, now that she is suffering with that physical disease. She is a lesbian.''
—Rep. Michele Bachmann, suggesting that gay singer Melissa Etheridge should repent after getting cancer, Nov. 2004

''I wish the American media would take a great look at the views of the people in Congress and find out: Are they pro-America or anti-America?''
—Rep. Michelle Bachmann, calling for a new McCarthyism, Oct. 2008

Thanks so much for Michele, God. I honestly wish I believed in you, 'cause you're the bestest god there is!

Yup, that's what I wish I had time to write to mark the five-year anniversary of Ned Lamont's historic primary victory over Joe Lieberman. 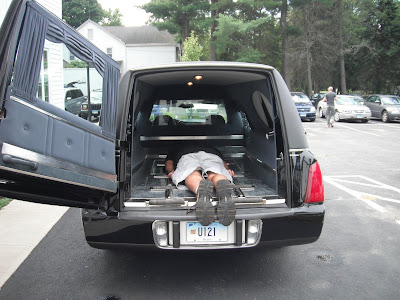 I'm tired, but not THAT tired!

I'm currently working on a feature film all month, which basically means 12 to 16 hour days that will leave little or no time for blogging.

Or at least, blogging when I'm not so tired that I can't even make even the tiniest bit of sense.

(In fact, I'm not even 100% sure about the grammatical integrity of that last sentence!)

Anyway, the film is called "Isn't It Delicious?" and it has stellar cast featuring Kathleen Chalfant, Keir Dullea (yes, I actually put a microphone on Dave Bowman from "2001: A Space Odyssey"!), Malachy McCourt, and many others. Here's a link to a story about the film in the Connecticut Post.

Well, I'd love to stay and chat, but I must be off to the set. See you in Cannes! 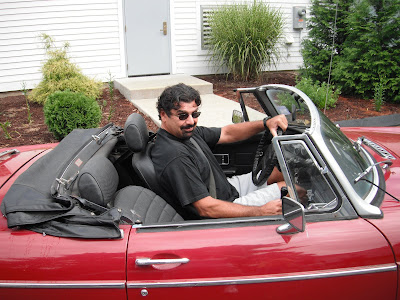