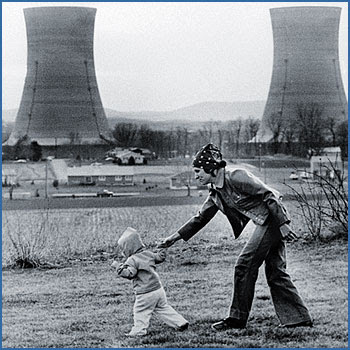 If you are like me (that is, rapidly aging) then you'll probably remember the several days of uncertainty that started on March 28th, 1979. This weekend is the 30th anniversary of the Three Mile Island accident.

Now, please keep in mind this article has no agenda, or pro or con angle on nuclear power. I'm just writing it to mark an anniversary of my experience during a moment in history.

I had just turned twenty. Suddenly, everyone on TV was talking about this island; one that I incorrectly supposed was three miles long. I recall hearing the conflicting reports and newscasts peppered with phrases like "loss of coolant accident", "venting radioactive gases", and the one that scared the living bejeezus out of everyone, "nuclear core meltdown".

It was a weird time. In the post-Watergate and -Vietnam era, people were very skeptical about how truthful the government was being about the accident. Living in Connecticut at the time, we were very aware that the prevailing winds tended to flow in from the west (the direction of Pennsylvania). I remember thinking that if the reactor suffered a complete meltdown and a massive release of radioactive clouds, I didn't even know where I could go. Further east or north would probably be futile with the wind direction; and besides, the roads would likely be impassible from all the other panicked evacuees. So I stay put and watched TV.

Walter Cronkite, the venerable CBS anchor, delivered the news of the event and tried to help make sense of the many reports:

The accident occurred just twelve days after the movie "The China Syndrome" hit the theaters. The tense drama portrayed conditions in an unsafe nuclear power plant, and by a very strange coincidence, one of the characters in the movie stated that a nuclear power plant meltdown could render uninhabitable an area "the size of Pennsylvania". Three Mile Island is located just ten miles from Harrisburg Pennsylvania.

Boy, they sure didn't know how to make exciting trailers back then, did they? That sucked! It was like watching a stale documentary. We must have been bored shitless back in those days to have gone to see a movie sold like that.

Eventually, the plant operators and emergency crew managed to contain and stabilize the accident, and the crisis passed. Roughly half of the reactor's core had melted but was cooled enough to prevent a runaway chain reaction. The plant was sealed and after many years the core was finally removed and stored. But the entire containment building is still very dangerous, and the reactor building was closed soon after the accident. There is still a separate reactor complex at Three Mile Island in operation today.

We dodged a bullet, no question about it. If you want to see what it looks like to unsuccessfully dodge that bullet, see the information about the Chernobyl disaster.

I was only 6 at the time so I do not remember a thing about that day. Thanks for sharing.

As depressing as this is, I was at school at Penn State; I drove right by that reactor on my way to and from the campus.

What I remember best about that time was that I-81 ran through Middletown; and there were no alternatives for me to get back to CT...wonder how many unforeseen "choke points" like that exist in vital places......

I was there! At a hotel just upriver from 3 Mile Islad when it blew! The first reports did not reveal how bad it was - but then the governor of PA recommended that all pregnant women and children under 5 evcuate Harrisburg. I didn't need any firther encouragement. I figured the highways out of town would be jammed. I raced out to my car and drove like a bat out of hell back to NY - without another soul on the road!


I got some kidding about my glow when I got back, but believe me, it wans't funny at the time.

I have done some research since then about nucleara ccidents, including those right here in Ct. I will try to dig it up if anyone is interested.

Jon, was THIS the hotel where you were staying?

yeah, I'd like to hear about the local nuclear accidents. Restful night's sleep is way overrated anyway! LOL!

No, that hotel was downwind from the release, fortunately our hotel was upwind. But I did participate in the only nuclear evacaution in America, even if no one else did.