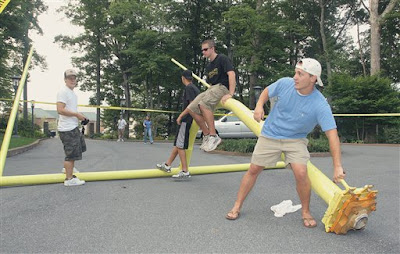 I'm actually quite impressed with how this is going. Not everyone is going to be happy about it, but then again, are they ever? It's getting accomplished, and hopefully we'll avoid some of the more drastic cutbacks in state services that are being proposed.
Posted by CT Bob at 7/19/2011 07:31:00 AM

Hrmmm...and you said I wasn't paying attention when I told you they would just change the rules.

You do know that not "everyone" gets to vote right? Only select members.

I'm glad you're "impressed" with the way this happened, it again opens the door into the minds of the liberal/Socialist/Communist mentality.

No, I'll admit you were right. I was astounded that the union leaders got it done; I didn't think it could happen.

So the worst thing that'll happen is the unions will make a few minor concessions, nobody will lose their job, and the budget will be balanced.

Gee that would be horrible, wouldn't it?

Yeh, just last week we coulda shut down 2 prisons and DMV offices and a few other State agencies that were deemed non-essential and the Gov. while not happy, said he could live with it.
So what changed? These offices and prisons are now Magically "essential"? Yes, yes they are, only because they will have paychecks. There's a good reason right?
Why didn't the Gov. just jack up the TAxes higher to begin with, you do know that there is a built in surplus right Bob? doesn't that mean our taxes are already enough to cover expenses?
Games, nothing but games. And we all though Jodi was playing around..she looks like a poser compared to this guy.