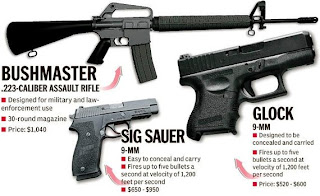 i'm also a pistol owner with a valid state permit to do so and a Ct resident, origionally born and raised in Newington, now residing in Manchester. I do not own, nor have i ever owned, a rifle of any kind or a shotgun of any kind.

I think thats great that this law will not infringe on your rights to go shoot at paper, but what of the rights of other to do the same? take away their right to shoot at paper bbecause of the look of their gun or the size of the magazine?

if youre shooting at a piece of paper with a pistol and a 10rd magazine, and the guy next to you is shooting at paper with a bushmaster and a 30rd magazine what is the crime? The actions of both individuals are the same and there is no victim of either of those actions, yet the individual next to you is looking at jailtime, not because of an action he commited being dangerous or invasive to another individual.

this is where the law becomes authoritarian. Murder, assault, robbery, manslaughter, even threatening, are all already crimes.

Now shooting at a piece of paper is a crime, heck, not even commiting an action, just owning something makes you criminal.

This is a step backwards, not forward.

I agree with you for the most part. Sadly, the massive availability of assault weapons has gotten so far out of control in our nation that it is far too easy for a nutcase to obtain the necessary firepower to destroy dozens of lives in an instant.

It really boils down to a matter of degree. Just as it's perfectly legal to own and operate a motor vehicle, I can't take a Nascar race car for a jaunt to the market at 180 mph. That would be unsafe for the public at large.

The same thing applies to advanced weaponry. If the 2nd Amendment was all encompassing of every conceivable weapon, then we'd all have the right to own RPGs, 50-cal machine guns, and tactical nuclear weapons. We need to draw the line somewhere, and I simply don't agree with the need for a 30-round clip for home protection.

Maybe if some of these people spent more time at the range, they wouldn't NEED 30 shots to hit what they're aiming at!