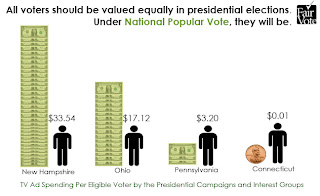 UPDATE: Jason Paul has an opposing Op-ed over at CTNJ worthy of consideration in this matter. Particularly in the case of Florida, who can't seem to get their shit together to count their votes in a timely and accurate fashion. A national vote recount could be an epic nightmare of year 2000 proportions.
Posted by CT Bob at 5/23/2013 11:48:00 AM

To abolish the Electoral College would need a constitutional amendment, and could be stopped by states with as little as 3% of the U.S. population.

The National Popular Vote bill would guarantee the Presidency to the candidate who receives the most popular votes in all 50 states (and DC).

Every vote, everywhere, would be politically relevant and equal in presidential elections. No more distorting and divisive red and blue state maps. There would no longer be a handful of 'battleground' states where voters and policies are more important than those of the voters in 80% of the states that now are just 'spectators' and ignored after the conventions.

When the bill is enacted by states with a majority of the electoral votes– enough Electoral College votes to elect a President (270 of 538), all the electoral votes from the enacting states would be awarded to the presidential candidate who receives the most popular votes in all 50 states and DC.

The presidential election system that we have today was not designed, anticipated, or favored by the Founding Fathers but, instead, is the product of decades of evolutionary change precipitated by the emergence of political parties and enactment by 48 states of winner-take-all laws, not mentioned, much less endorsed, in the Constitution.


The bill uses the power given to each state by the Founding Fathers in the Constitution to change how they award their electoral votes for President. Historically, virtually all of the major changes in the method of electing the President, including ending the requirement that only men who owned substantial property could vote and 48 current state-by-state winner-take-all laws, have come about by state legislative action.

A survey of Connecticut voters showed 74% overall support for the idea that the President of the United States should be the candidate who receives the most popular votes in all 50 states. Voters were asked:

"How do you think we should elect the President: Should it be the candidate who gets the most votes in all 50 states, or the current Electoral College system?"

Support for a national popular vote, by political affiliation, was 80% among Democrats, 67% among Republicans, and 71% among others.

Thanks for the cut & paste info, but the article stated that the states had the ability to change the law without amending the Constitution. So what's the truth in this discussion?

The National Popular Vote bill would change current state winner-take-all laws that award all of a state’s Electoral College votes to the candidate who get the most popular votes in each separate state (not mentioned in the U.S. Constitution, but since enacted by 48 states), to a system guaranteeing the majority of Electoral College votes for, and the Presidency to, the candidate getting the most popular votes in the entire United States.


The bill preserves the constitutionally mandated Electoral College and state control of elections. It ensures that every vote is equal, every voter will matter, in every state, in every presidential election, and the candidate with the most votes wins, as in virtually every other election in the country.


Under National Popular Vote, every vote, everywhere, would be politically relevant and equal in every presidential election. Every vote would be included in the state counts and national count. The candidate with the most popular votes in all 50 states and DC would get the needed 270+ Electoral College votes from the enacting states. The bill would thus guarantee the Presidency to the candidate who receives the most popular votes.

So, it would be like each electoral voter represents a number of voters, sort of like the members of the House each represents a fixed number of citizens? If a candidate wins 60% of the popular vote, then 6 out of every 10 electors would be required to vote for that candidate?

The candidate who wins the most popular votes in the country would get ALL the electoral votes of the states that enact the National Popular Vote bill, when states with the needed 270 majority of electoral votes enact the bill.

OK that makes it clear now. Thanks.