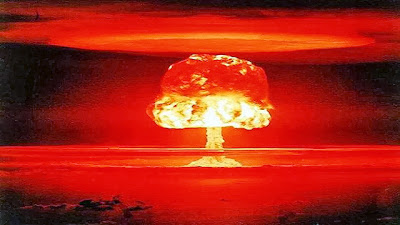 Or, as George W. Bush was fond of saying, "nu-ku-lar" option.

(This guy graduated from Yale? Jeez, they'll let any moron with a senator for a dad granddaddy get a diploma!)

Anyway, today history was made when the Senate, exasperated at the Republicans filibustering every single judicial appointment, passed with a simple majority vote to remove the filibuster from being invoked in the cases of judicial and executive nominees.

They way I understand it, the filibuster is still available for other issues.

What I want to know is, why didn't they do this back in 2009, and why didn't they make it comprehensive to all the areas of Senate debate? We'd have gotten single payer healthcare, immigration reform, a more realistic stimulus package, and possibly some movement on climate change.

Instead, we have a terrible compromise for healthcare, no immigration reform, a stimulus that probably was 30% effective at best, and more carbon going into the atmosphere than ever!

This would have been useful four years ago.

Now, it's just a distraction, and a worry should the Republicans ever regain a majority in the Senate.

Grandpa Prescott was the Senator.
Father George Herbert's career:
Bush began his career in 1948 working in the oil industry in Texas and created a lucrative career for himself. He became active in the Republican party. In 1967, he won a seat in the U.S. House of Representatives. In 1971, he was U.S. Ambassador to the United Nations. He served as the chairman of the Republican National Committee (1973-4). He was the Chief Liaison to China under Ford. From 1976-77, he served as the Director of the CIA. From 1981-89, he served as Vice President under Reagan.

Maybe CIA Director is more powerful than US Senator.
oldswede

Ah, yes that's right. Grampa Prescott was the senator from Connecticut many years ago. HW was the CIA director at a time I think after W was at Yale. Thanks for the correction.