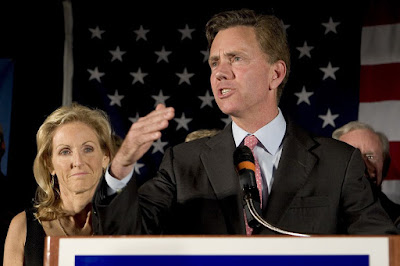 In the "Nobody Is The Least Bit Surprised Department", Greenwich millionaire and all-around nice guy Ned Lamont cruised to a massive primary win for Governor over Bridgeport Mayor Joe Ganim.

The final spread was roughly 81% to 19%, with Lamont's message of financial stability and job growth resonating with the voters.

Former Sec. of State Susan Bysiewicz also prevailed in the race for Lt. Governor. Political newcomer Eva Bermudez-Zimmerman had a very good showing with strong grassroots support, receiving around 40% of the vote. I'm sure we'll be hearing more from Eva in the future.

William Tong won for Attorney General and Shawn Wooden got the Treasurer's nod.

In an historic win, 5th CD candidate for Congress and 2016 Teacher of the Year Jahana Hayes won big over Simsbury 1st Selectman Mary Glassman. Hayes is positioned to be the first black Congresswoman from New England should she win in the heavily Democratic district in November.

Today President Trump tweeted his support for the recent Democrat who didn't even vote in the 2016 election. I'm guessing with Trump's endorsement we'll probably see Stefanowski get a similar percentage of the vote in November.

I'm sure we'll be hearing a lot more of Stefanowski's message now that he's defeated the other Trumpian candidates. Noteworthy is that not a single GOP candidate has even hinted that any of the President's toxic policies are anything they would disagree with.

But for now, it's really great to bask in a big win with Ned Lamont, and start getting geared up for a bruising campaign with all the SuperPAC money that will flow into the opposition's coffers.