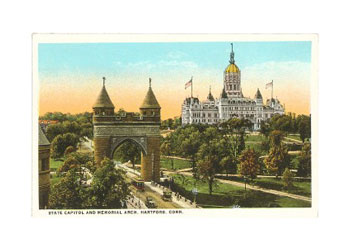 Late last week I spoke at length with Lesley D. Mara, Deputy Secretary of the State for Connecticut, about the procedures that are being put in place to ensure the election is fair and the results accurate. The new voting machines are being used in 25 municipalities this November, and will be implemented statewide by late Spring 2007.

My first inquiry was about the lack of detailed information about the voting machine in Secretary Bysiewicz's press releases (as an aside, even after all the articles I've written about the new voting machines, I still have to look up Susan's last name to spell it properly!). In some of the press releases, the vendor is named, but you have to go to the LHS Associates of Massachusetts web site to find out that the new machines are actually the Accu-vote OS2000 by Diebold.

In fact, I had trouble finding the name Diebold anywhere on LHS's website. I found the model "Accu-vote OS2000" there, then Googled it to find it's made by Diebold.

It's almost as if the name "Diebold" is something of a dirty word.

When I asked Ms. Mara about this, she assured me that it wasn't a deliberate effort to hide the Diebold name. I suggested that voter confidence would be improved if future press releases contained detailed make and model information on the new voting machines, rather than just referring to them as "optical scanning technology".

I then inquired about the procedures for the new machines. She gave me some details about how the voting officials in the individual towns will need to pick up the machines early in the morning on election day, which will eliminate the "sleep over" of the machines at people's homes. Two election officials will be required to pick them up. If the procedures are followed, no single person should have access to the machine at any point. This can help prevent machine tampering.

The Secretary's office will also limit the how close to the election any manufacturer "patches" can be installed on the machines. The University of Connecticut Computer Science department will be given proper time to verify whatever patches or fixes Diebold sends will actually do what it's supposed to, and not install a hack or hidden program onto the tabulators. Ms. Mara also promised to get me the results of the UConn certification report of the machines and also the details on the manditory audits of approximately 5% of the voting machines to verify the results against the paper ballots.

I'd like to thank Ms. Mara for her time. While there are potential problems with any new technology, it's obvious that the Secretary of State's office is very concerned with security in the elections, and we welcome their help in distributing information about the new machines. I will follow up on this before the election, and I invite anyone from the Secretary of State's office to email me if they want to make any statements on this blog.

I am proud and relieved that our Democratic officials are taking these steps to help insure even the appearance of imporpriety. I also commend you VERY highly for staying on this issue, BA. These are the kinds of details that tend to fall through the cracks if someone is not watching. WTG Bob!

Oh, and CONGRATS on all that press coverage! But condolences to your wife. ;-)

You are almost outdoing yourself today...

The old lever voting machines are more reliable. Their only drawback is transporting them due to their size and weight (but that actually helps security).

Unfortunately it was Senator Dodd who pushed through Congress a requirement that would only allow electronic voting machines with a paper trail. The auditable paper trail requirement was added after electronic machines were field tested and found to be "somewhat" inaccurate. (The lever machines can provide a paper summary, i.e. recorded votes, which should be zero, just before the polls open and the results at the close of the poll).

The lever/mechanical machines have direct physical contact from one part to another. When lever 2B is pushed down, this activates the machine to record a vote for 2B when the entry/exit red handled level is returned to the left side of the machine.

In CT we are being forced to replace these accurate machines because of a terrible voting system used in parts of Florida in 2000. Hey, they had a problem. The 26% of the country voting with lever machines had no problems, other than a possible machine breakdown here or there.

But, Sen. Dodd and Secretary Bysiewicz were heavily lobbied by the electronic voting machine industry. The lobbiests won! Sec. Bysiewicz has repeatedly and knowingly falsley stated that replacements parts are not available for lever machines. THAT IS A LIE. She knows that Voting Machine Services, Inc. inventories and manufactures replacement parts for the lever machines.

Some years ago, it may have been when Simmons was first elected, or the election before, there was a recount in CT's 2nd CD. Norwich was one of about 9 towns in the state agreeing to test the LHS machine (instead of using the lever machines). I was told by someone in my town clerk's office that there was the election night total, a 1st recount total, a 2nd recount total, and a 3rd (and possibly 4th) recount total. None of them agreed. Then there was a hand recount which was different than all the others.

My town has had recounts and the only changes were a result of the numbers being recorded incorrectly on the moderator's return (i.e. 526 on the machine written as 562 on the return) or in the HAND COUNTED absentee ballots.

Poll workers are required to be at the polls no later than 5:15 on election day to set up the polling place. Most of them have to get up at about 4 AM. The lever machines are already there. Now, if two people (presumably not both from one political party) have to pick up the new machines, they will have to get up even earlier, 3:30 or 3 AM? Remember most of these people are senior citizens and they work until the polling place is closed up, often after 9 PM.

The LHS system will be more expensive for the towns to operate and will not be any more accurate than the lever machines.

This mandated change, at the behest of Sen. Dodd in 2002, is a waste of $ millions that could be put to better use.

I'm sure this is arcane, but did she say anything about "mechanics" in each municipality certifying the machines operate properly? That's required under the current voting regulations. I'm going to guess that these machines probably have a few thousand lines of software code. How can anyone actually certify (under penalty of law) that the machines operate correctly?

And here's a real "black helicopter" notion for you: How can you say that what the machine prints out is the actual operating program, and not a trojan horse that says what it's supposed to be running?

I'm still very worried about these machines, especially since your coverage of just how easy it is to gain entry to the inside of the case. There were so very many ways to design them to be more secure that I just have to wonder.

I'd like to see a hand recount soon after the polls close, and publicity about it. It's not unreasonable to achieve that.

We have to face the fact that the old lever machines are going to be phased out. Since we're getting new technology, the best we can do is make absolutely sure it's as safe and secure as possible.

We all need to take an interest in these issues. There are 169 municipalities in Connecticut, and nothing is preventing anyone from volunteering to be involved in your own town's election process.

Or at the very least, we can keep a close eye on the process and follow up on things like the UConn security study and the latest Sec. of State policies regarding election security. Susan's office has promised to keep me posted on these things, and trust me that I'll follow up before the election.

Here's a promo for the new machines!!! www.toostupidtobepresident.com/shockwave/votingmachines.htm

This is much ado about nothing. It is really a way for Democrats to justify their undermining of the integrity of the voting system in their chase to capture the 2000 election. Like the King with new clothes, it was important to make sure the issue was perceived as grave and real after their judicial loss in order to give legitmacy to one of the most serious attacks ever mounted on our democracy in its history.

As a statistical matter, the vast cost of implementing equally unreliable electromic methods hardly justifies the illusive benefits of increased accuracy. The notion that we need more accurate voting than paper is a complete fabrication made from the inventive minds of those who plotted to over-throw a US Presidential election.

The legacy they left has been disasterous. The Mexican Presidential elections are a prime example of how elections everywhere are now tainted and questioned, lead to civil unrest, and destabilize elected governments.

Thanks Al Gore. Thanks for undermining America.