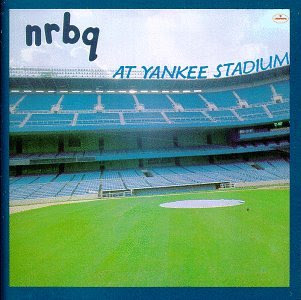 They've been called "The World's Greatest Bar Band" for good reason - there's nothing like being in the crowd after NRBQ had just literally ignited the place with their first song of the night and hearing Big Al say, "Awww, the band is HOT!"

You knew then you were in for a rockin' good time!

NRBQ, or the New Rhythm and Blues Quartet, has been playing in and around Connecticut for over 40 years. I remember first seeing them in 1978, the year they released their great album "NRBQ at Yankee Stadium". The cover photo is a great visual gag, showing four tiny figures sitting in a deserted Yankee Stadium.

I honestly can't recall how many times I saw the band (probably at least 30 times) but it was usually in one of the many semi-dives that populated the New Haven music scene back in those days before the drinking age was raised from 18 to 21, causing many of them to close (but saving quite a few lives in the process, so I guess it was worth it). The old Arcadia Ballroom was one of my favorite venues to see the band; there was something special about that decrepit beer-soaked hall.

In September 1979, NRBQ appeared at Toad's Place for a show that was simulcast on WPLR 99.1, which I recorded on my cassette deck (with Dolby!) I kept that cassette in my '73 Ford Gran Torino and 85' Mustang for years before storing it in the basement. I must have played it 500 times in my car over the years. A few years ago I found it and transferred the music to my computer with an analog cable, and then burned it to a CD.

The music went from the band playing in the crowded and smokey Toad's Place, over the FM airwaves, into my stereo, onto my tape, into my car for a decade of summers and winters, into a box in my basement for another decade, onto my computer, and finally onto a CD. It still sounds great and it's always been one of my favorites.

Some music is just too damned good to fade away!

Al Anderson made a guest appearance in August at the Bonnie Raitt/Taj Mahal concert at the Oakdale (I know it's the Chevrolet Theater now, but I don't care). Very impressive jam with Bonnie, Taj and a bunch of side men.
oldswede

Ahh, The New Haven scene back in the day. The Grotto, Eight To The Bar rocking the Liberty Belle on warm summer nights, getting 86'd from Richter's for breaking one of their yard of ale glasses...

Was it NRBQ that did "Get That Gasoline" and "It Was An Accident"?

Howzabout making that old show into MP3's and sharing it with us?

I had a souped up '58 VW Bus for many years back then with one cassettte- "Back In Black" playing over and over.

NRBQ did in fact put out "Get them Gasoline Blues" in 1974...I used to regularly make my way to the Oxford Ale House or Nellie Green's whenever they played there.

I still have that song on a 45...wonder where I put my Victrola?

OS, I believe Al Anderson is also the first inductee to the State Music Hall of Fame here in Connecticut.

LZ, yeah as soon as I figure out how to post mp3's online, I'll put up a few of them.

WHB, I have a great live version of "Get That Gasoline", along with "Howard Johnson", another awesome live song.

After watching the videos you posted plus some others on YouTube, I realized that the Al Anderson I saw a few weeks ago must be on the CtBob diet. Much slimmer now.
oldswede

For your post NRBQ fix, go see the Shinolas at Tapas in Hartford every Monday night for free. Ann & Asylum Streets. With Jim Chapdelaine (formerly Dancing with Henry & Mister Right, for you Hartford-ites) it is Americana music and Medium Al has been known to sit in.
mericana and roots to set the mood as you chow down on the restaurant's big, bold options.

*Great* pedal steel. Made me weep.

This is really really scary,

Do you guys realize that every one of us were probably in one of the bars mentioned in this post at the same time?

I can't believe Nellie Greens was mentioned here.It went from a rum running whorehouse to a gret div bar to a dam condo complex today.

Thanks to all for bringing back memories of a very very misspent youth that I was probably to wasted to remember most of but wouldn't change a minute of.

It wouldn't surprise me at all if we were in the same dives at the same time. You might remember me as the guy barfing in the alley around closing time!

Music groupies and political groupies are all the same, no lives other than to live vicariously through the lives of those they feel are more valuable than their own.
Sad, empty lives you all have.

The irony of your comment on my blog, which obviously intrigues you nearly to the point of obsession, is amazing. Keep reading, maybe you'll learn something.