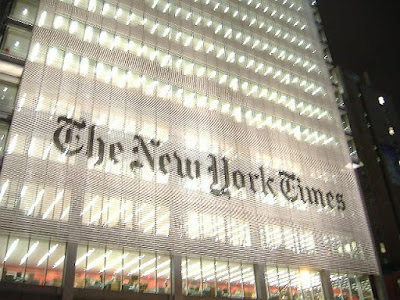 (Bob Adams photo)
Can we all just admit that the hallowed New York Times is no longer a thing that should even remotely be considered a "liberal" newspaper?

They're a "corporatist entity", plain and simple. And their corporate ideology is reflected quite strongly in their editorial choices. They'll publish anything that will sell more papers and (more importantly) more advertising.

Just look at how this contrived "scandal" has evolved:

1) Linda McMahon's campaign admitted they scoured thousands of hours of Richard Blumenthal speeches to look for anything that might be used to embarrass him.

2) They took a short segment out of context from one speech he gave and presented it to the NY Times as if it was a copy of the "Pentagon Papers".

3) The Times indulged in their famous "steno reporting" and simply repeated the allegations without making any effort to find the context of what really happened.

4) Blumenthal's campaign then provided video of the ENTIRE speech, which clearly showed he properly framed his history right off the bat.

6) Colin McEnroe actually took a few minutes to research the story and came up with universal agreement among Connecticut's reporters that Blumenthal has always said he served in the Marine Reserves; which, by the way, is a hell of a lot closer to actual combat than that shmendrik Christopher Shays ever got!

And that's how you blog a story when you don't have a lot of time to go into it in depth. You simply quote a bunch of other people, throw in a few random insults, shake well and hit "publish post"!

UPDATE: Just for fun, here's a Courant video where Linda is asked about her role in feeding the Blumenthal video to the Times, and she eschews political speak, then indulges in political speak, and finally when asked again admits she was involved in supplying the Times with the story.

That's a lot of bullshit to cram into a 36-second video! Bravo to the Courant for posting this.

The general response of CT progressives to The Blumenthal Affair has turned into an embarrassing super-overkill effort to "Bludgeon the Messenger to DEATH!" (the NYT... )

Whatever legitimate criticism there may be, the volume and intensity of attack on the paper (in the blogs, anyway) has the effect of suggesting a VERY insecure political campaign that isn't sure of itself OR its candidate.

And the more you scream "bloody murder" at the NYT, the more sympathetic you make the paper look - and unsympathetic, yourselves.

Not really. This story had a factual negative impact on a candidate for US Senate. The story is blatantly false. There has to be some sort of accountability here.

We're finally done with putting up with the NY Times and their shoddy journalism. This has been going on for the better part of the last decade, and it's only getting worse.

Does the name Judith Miller ring a bell?

We've had it with their bullshit, and we're calling them on it. You go ahead and feel "sympathetic" to the Times if you want to; I'm not going to let them slide on their working as GOP surrogates.

What surprises me is that I have seen no one noticing how this whole concocted stew follows the Rove playbook. FatboyK (remember his rapper act?) always attacks the target's strongest asset. Blumenthal is well regarded for his ethics and integrity. So, boom, drop a bomb full of crap and turn the gopper trolls loose on the internet boards to get the momentum built. From there, the lies become self-reinforcing.
What else would you expect from an unscrupulous, far-too-rich-on-blood-money, republican running a vanity campaign?
oldswede

Linda McMahon's candidacy is all "smoke and mirrors"...she is trying to buy the US senate seat and she is horrified at the prospect of having to face Peter Schiff at the August primary...

She also has recently claimed the WWE is a “soap opera" and not real?

McMahon will never truthfully answer these questions to the public.

As one blogger put it, "The WWE was nothing but a vile organization that did not produce “soap operas”, but sadomasochistic and misogynist garbage that was, quite simply, obscene." Imagine the message sent to thousands of young, impressionable male fans that it was OK to sexually degrade women with such impunity.

And to Chris Healy (CT Republican Party Chairman whose wife is on the Linda McMahon payroll) and Ed Patru (Linda McMahon's attorney)...premature deaths, steroid and other drug abuse, pornography and other sleaze are not an old story, it’s about character, and CT voters do care...Linda McMahon bought Healy out...I hope Peter Schiff destroys McMahon in the August primary and completely embarrasses Healy.

McMahon is an insult to any intelligent CT voter and to any Republican who cherishes family values, especially any self-respecting women and mothers...as an independent voter and educator, I would rather vote for Frankenstein than her.