In what was possibly an accidental irony, the General Assembly's Finance Revenue and Bonding Committee today passed the Medical marijuana bill 36-15. Today is April 20th, also known as "4/20". It now moves to the House of Representatives for further action.

I'm kind of neutral about this law, because I don't smoke pot (not since high school, anyway) but I think pot should be legalized, with the same restrictions (and tax revenues) as booze or cigarettes. People, thousands of people in this state, smoke pot daily (I know quite a few of them actually), and it would be nice to see the state make some money off it, and also reduce the criminal element involved in selling it.

What I don't like about it is the sham of having it called "medical marijuana" when in fact it's just a ruse to allow anyone to get a "license" to smoke pot. I really hate when people manipulate the law to dishonestly achieve their agenda.

"Hi doctor, my back hurts."

How about we face the issue honestly and call it what it is: a bill to legalize pot for personal use?

The tactic of using false "medical" issues to enact legislation (and yes, I do know there are some valid medical reasons to ingest pot; from which maybe 2 to 5% of the licensees actually suffer. The rest are just regular stoners and everyone knows it) isn't all that different from the abominable Virginia law that requires women seeking a legal abortion to undergo an invasive and painful ultrasound exam that is solely designed to discourage them from terminating an unwanted pregnancy.

I mean, just look at this "medical marijuana dispensary" in California. 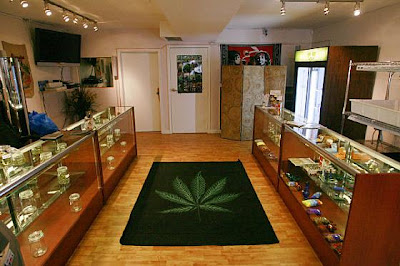 I dunno, but it doesn't look much like a typical doctor's office or a pharmacy.

Which is absolutely fine, don't get me wrong. It's exactly what a pot store should look like.

I guess I hope a law gets proposed and passes which portrays the issue honestly, rather than a sham that is dishonest and opens the door to more Draconian legislation like we've seen in Virginia.

Speaking for myself- there are times that it's nice, and sometimes I feel disappointed in myself for not having more natural "creativity", which it seems to bring out. OTOH, I usually avoid it because I get a LOT more done without the distraction, and I know some people who don't seem to live for anything else. Except for the creativity part, one could say the same for beer...

Q: Why did the short hair cross the road?
A: Because someone told him to.

Q: Why did the long hair cross the road?
A: Because someone told him NOT to.

I think that just about sums up the reason for the "Prohibition"... And be sure to click on my name for a fun musical thing to go along with your viewpoint in this groovy post. "full-screen" it, tee hee!

Bob, I agree with you. It should just be legalized outright, taxed & regulated.