You can buy Chris Shays, but you can't own him

Jesus! This story is almost too ridiculous to believe.

Senate candidate and carpetbagger Chris Shays, as a Congressman, received at least $5,000 in contributions from WWF (now WWE) executives Vince and Linda McMahon during the years that they produced their most extreme and tasteless television programming.

And Shays had no problem with that in the least!

Recently, Senate candidate Chris Shays attacked senate candidate Linda McMahon over the content of the programming that was made during those years he happily accepted those generous contributions.

Talk about biting the hand that feeds you!

From Neil Vigdor via the Connecticut Post/Greenwich Time:

When Christopher Shays was a member of Congress, campaign finance records show he accepted $5,000 in political donations from WWE power couple Linda and Vince McMahon, who the Republican Senate contender now claims promote violence and soft-core pornography through their highly profitable wrestling brand.

Linda McMahon said her rival in the GOP nominating race not once raised concerns about the television content of the Stamford-based company formerly known as World Wrestling Entertainment while he was in office from 1987 to 2008.

"No, as a matter of fact, he came to WWE headquarters," McMahon told Greenwich Time in an interview Wednesday night. "He even had a photo taken with Vince." 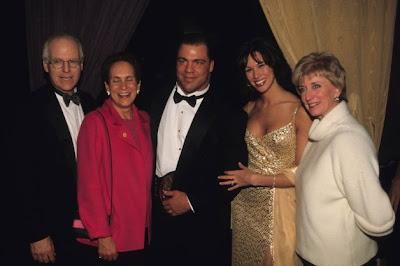 (Shays on left, Linda on right, at a WWF event circa 2001)
So, I guess whatever violent, pornographic and misogynistic video they were broadcasting back when Shays was receiving money from them was A-OK. And now that Linda McMahon is opposing Shays for the GOP nomination, it's suddenly all wrong.

This is the worst kind of hypocrisy. Chris Shays should apologize to the McMahons, then he should donate $5,000 to a charity that fights violence.

Then he should go back to his crab shack on Chesapeake Bay and try to get a job as a beltway lobbyist.

That one made me about fall out of my chair! I could just hear his squeaky little voice whining when I read your post. I can't stop laughing, and it's making it awfully tough to type.

Not sure I understand what the issue is here. Shays is right in that the WWE is not "family programming"... that doesn't mean he can't accept a donation.

I think it's a little worse from McMahon's side that she gave money and supported Shays effectively endorsing him and his record when now she's trying to tear him apart about things she didn't seem to mind way back when. The best part of this is that Shays probably didn't even know Linda donated money to him until now. She probably cut the check to some intern.

Anyway, what do we expect, it's politics.

Judging from the picture, I'd say Chris Shays knew exactly who was contributing the money to his campaign. One of the benefits of being a big dollar donor to a campaign is you get to take a photo with the candidate, his wife, and a wrestler who participated in the awful "soft-core pornography" that the WWE is known for.

But you are right in that "it's politics". It's also shameful.

LZ, glad you got a kick out of it!


Hello Bob. I think this might be a scam. It is understood that if you bought it, you own it already. Tsk tsk. Not good.

I guess what I'm saying is that if I were running for office, I wouldn't see accepting a donation from someone as blanket endorsement of the donor's business. Neither is taking a photo. I've taken plenty of photos and had gone to parties with people I totally disagree with.

I still think the donation is more hypocritical for Linda since she was fine with shays and his record until he ran for a seat she wanted.