1975 Jethro Tull's "Minstrel In The Gallery" was probably my favorite song at that time. Something about Ian Anderson's lyrics and showmanship really resonated with me. This was a time when "Monty Python's Flying Circus" was aired every Sunday night on PBS, and the band Jethro Tull's uniquely British character fit in very well with that time.

And the song is mapped out to portray a dichotomy in time. The song starts with an acoustic guitar only, then after an electric bridge, repeats the lyrics with a heavy rocking beat. This is demonstrated graphically where one side of the album cover shows a stylized medieval court entertained by a band of roving minstrels, and the other shows the band in their present day recording studio.

Here's what I'm referring to: 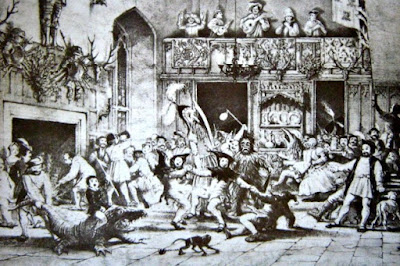 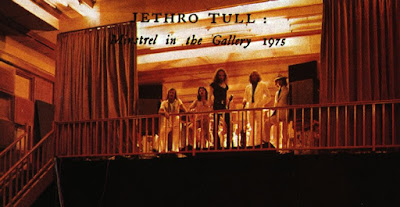 The minstrel in the gallery
Looked down upon the smiling faces.
He met the gazes observed the spaces
Between the old men's cackle.

He brewed a song of love and hatred,
Oblique suggestions and he waited.
He polarized the pumpkin-eaters,
Static-humming panel-beaters,

On the parts they never mention.
He pacified the nappy-suffering, infant-bleating,
One-line jokers, T.V. documentary makers
(overfed and undertakers).

Sunday paper backgammon players
Family-scarred and women-haters.
Then he called the band down to the stage
And he looked at all the friends he'd made.

The minstrel in the gallery
Looked down on the rabbit-run.
And threw away his looking-glass
Saw his face in everyone.
Written by Ian Anderson, Martin Barre • Copyright © Warner/Chappell Music, Inc, BMG Rights Management US, LLC