The Russians are coming!

Today a Russian spy ship was tracked and approached to within roughly 30 miles of the Groton sub base.

Now, before everyone freaks out and starts thinking there are Russian boats cruising up and down Long Island Sound, there are some things we need to know. First of all, Russia and pretty much every other nation on Earth knows to respect the 12 mile limit, which is absolutely a line drawn in the water.

The original limit was 3 miles, but back during the Cold War, we all decided we didn't want Bolshevik vessels in sensitive areas like Long Island Sound or Chesapeake Bay. And we extended the limit to 12 miles, which precludes any way they can legally (as in, not being torpedoed) travel in those areas.

There is no point in Long Island Sound (or Fisher's Island Sound, which also is near Groton) that a Russian boat can approach without being accosted. Here's an image that shows Groton's location, along with a contour of the 12 mile limit: 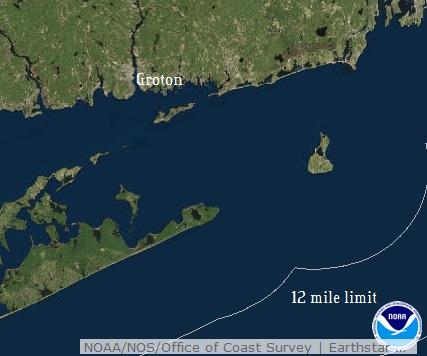 As you can see, any Russian boat can't get any closer than some miles outside a line between Montauk and Block Island. So yeah, while they technically were there, there wasn't really any there there!

However, based on events of the last week or so, the Russians are getting much bolder in their ways. Military jets have flown very close to a US warship in international waters, and the Russians haven't previously sent any spy boats much farther north than Delaware until today.

So probably, Vladimir Putin is being emboldened by the complete lack of leadership shown by his pal Donald J. Trump. Trump probably won't realize he's being punked by his BFF Putin until there's an international incident that will demand strong and decisive action.

And I can predict that the guy who has his tiny little hands on the orange football doesn't have what it takes to match the wile of a man who was powerful in the KGB and currently has more power than anyone else in the world, given our current president.
Posted by CT Bob at 2/15/2017 09:39:00 PM