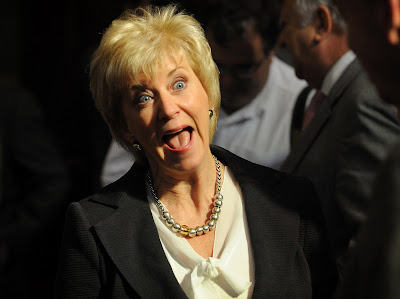 Boy, you gotta hand it to Linda McMahon. She has absolutely NO shame in accusing others of transgressions, while she herself is guilty of the exact same thing.

Even more so, by like a factor of TEN!

Linda's recent TV ads mentions how Chris Murphy, like many other Americans, ran into problems keeping up his mortgage payments. The way I understand it, Murphy was called into court for the start of foreclosure proceedings, but he managed to pull himself out of his financial situation and made good on all his debts.

Which is an honorable thing.

McMahon, on the other hand, filed for bankruptcy protection in 1976, apparently because her business was in the toilet.

Not quite so honorable, because bankruptcy often leads to creditors being shafted in the end.

In a bit of excellent reporting JC Reindl of The Day spells out Linda's financial woes:

The personal finances of McMahon and her Democratic opponent, Chris Murphy, have become central to this year's campaign, with McMahon calling on Murphy to release documents related to his financial problems in the mid-2000s.

The bankruptcy documents show the McMahons' biggest creditor as the former Mattatuck Bank & Trust Co. of Waterbury, which claimed $364,492. The second biggest creditor — a secured creditor — was Harold J. Hemingway of Burlington, who claimed $109,575. The next biggest was the Internal Revenue Service: $100,064.

We all know what Linda likes to do:

More from The Day:


The bankruptcy was initiated in April 1976, three months after the Connecticut Bank and Trust Co. foreclosed on the McMahons' Orchard Road home in West Hartford. At the time of foreclosure, the McMahons owed $133,167 on the mortgage, according to land records in West Hartford Town Hall.

Following a series of objections by the creditor banks over discharging the couple's debt, the discharge was granted in February 1977.

But the case didn't officially close until February 1982. During a final round of actions in U.S. Bankruptcy Court, a trustee for the creditors paid out $1,264.86, and the McMahons regained possession of a 1972 Buick Riviera, according to the documents

Land records show how the McMahons' West Hartford home was eventually auctioned for $147,500 in October 1976.

The McMahon campaign called this week on Murphy to release all documents related to his home foreclosure scare in the mid-2000s.

So, Linda the hypocrite called on Murphy to release all his financial data for his home, which he successfully pulled OUT of foreclosure; while herself not providing a scrap of data about the home she LOST and the bank had to AUCTION OFF, almost certainly at a loss after you factor in all the legal and administrative costs! 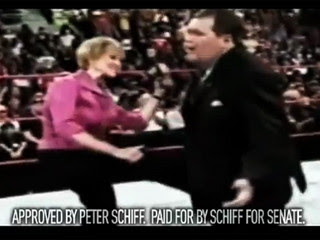 (File photo of McMahon dealing with a creditor)
So, Linda claims that Murphy is a bad guy because he was in some financial trouble to the tune of about $300K, which he made good upon; while she was tagged for owing over a MILLION dollars (over $3,000,000 in current value) and there's no proof that she paid much back!

Wow, what a great businesswoman.

But hey, there IS some good news: at least she got a Buick Riviera out of the deal! 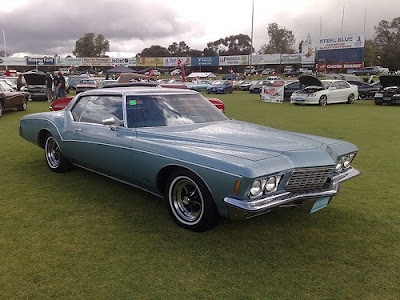 Lots of nerve on her part. As they say, "people who live in glass houses shouldn't throw stones." Maybe someone should mention this to Linda, in addition to Mitt (his dad was on welfare at one time) & Paul Ryan (social security death benefits from his dad.)

It's the Rovian way. Project your own weaknesses and failings on to your opponent and do a war dance.
oldswede

That's the great thing about the internet! Nothing can stay hidden like that for long.

Politicians can't get away with their bullshit like they used to. There are too many sources for solid background that will of necessity keep politicians honest.

Well, once they learn that, obviously.

McMahon is desperately trying to scrub the internet of all that awful copyrighted WWF footage; which, as we all know, is an exercise in futility. Once it's out there, it's out there forever!

The clear picture about bankruptcy is that the claimant does not pay his/her debts to the people they own money to. She got a fresh start and the ripple effect from the losses for others in unknown. She is now a multi-millionaire and what of the others?

Check out Crooks and Liars. They have a video of Linda, a few years ago, carping about the 47% that don't pay taxes. Hahahaha & I read she tried to distance herself from Mittens. You're right Bob, in this day & age, there's not much you can hide (except maybe tax returns.)