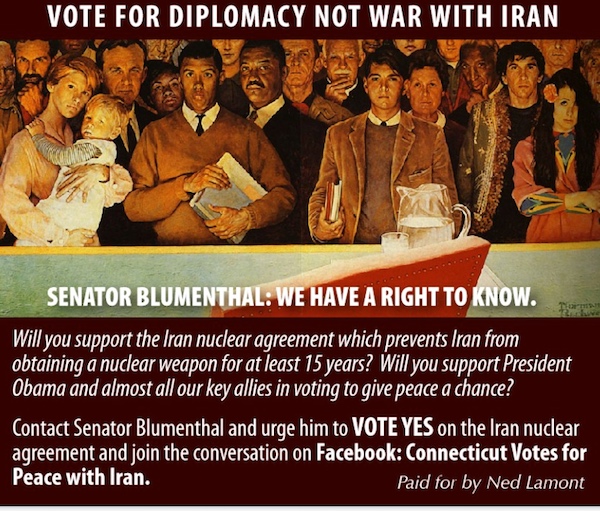 Former Senate candidate Ned Lamont has called for Sen. Richard Blumenthal to vote in favor of the multi-national, nuclear non-proliferation agreement that’s been struck with the government of Iran. All the other members of Connecticut's Washington delegation have voiced support of the deal.

Lamont posted advertisements online urging Sen. Blumenthal, the one holdout, to pledge his support of the agreement. This is obviously a difficult issue for the senator, and according to a story in CT News Junkie, "...the state’s senior senator wouldn’t say whether his Jewish heritage would play a part in his own decision to support or oppose the deal."

Not surprisingly, neo-con chickenhawk Joe Lieberman is actively campaigning against the deal. Lieberman has proven himself to be one of the biggest obstacles to a lasting peace in the region, and it doesn't take a political genius to figure out where AIPAC-Joe gets his bread buttered!

Lieberman is taking over as the head of an advocacy group, United Against Nuclear Iran (UANI), trying to kill the nuclear deal with Iran after a former executive decided to embrace the agreement. Former group president Gary Samore — the White House’s former top arms control adviser — is being replaced since he does not want to have the agreement blocked. It says something when the head of an organization devoted to killing the deal changes his mind after reading and reflecting on the agreement. It cost him the job, but obviously it was that important to him.

Congress is expected to vote on the resolution by September 17th.