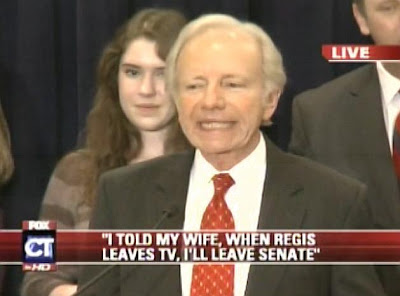 While he seemed assured (at least to himself) of winning another term in the Senate, Joe Lieberman spoke about his decision to not run again.

As excited as he is to "start a new life with new opportunities", Lieberman was annoyingly vague about his future plans. He even quoted the British American* rock band The Byrds while making his speech, apparently an attempt to portray himself as "hip" and "with it" for the younger demographic. Perhaps a new career in public service as a folk-rock lyricist will be his new calling.

(...and yes, before anyone hurries to post a "correction" in the comments, I'm well aware it was from Ecclesiastes. And yeah, it was also Pete Seeger's lyrics.)

So we're left with a strangely unsatisfying conclusion to a career that promises to be far from over. We have just under two years left for "Lame Duck Lieberman" to further obstruct or otherwise screw up progressive legislation.

Two years is a long friggin' time to have to champion legislation that will earn him the good graces of any number of corporate oligarchs. Something tells me his idea of continued "public service" will have something to do with a huge paycheck and a lot of Fox News appearances.

Despite my forebodings of a bombshell today, it appears to end with a whimper...

...and I look forward to the day when Joe Lieberman will no longer serve in the Senate and will become as irrelevant as Regis Philbin.

(you didn't think this was gonna be NICE, did you?) 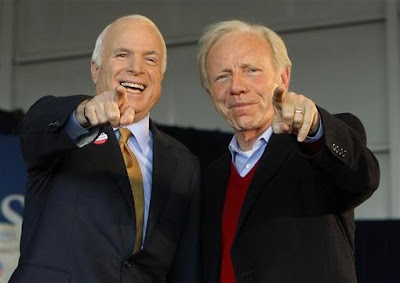 Well, this wasn't very nice, either. Campaigning for McCain; speaking at the Republican National Convention. What a douche!

The Byrds was California dudes. Yer buddy Google can help here too.
oldswede

LOL! You're right...I was thinking of The Animals!

Here's a Byrd and an Animal together in Connecticut. Hilton and Roger McGuinn at The Oakdale July 21, 2001 Last photo at the bottom.
Hilton Valentine lived (lives?) in Connecticut. Often plays around the area as Skiffledog like at Cafe Nine last October.
The Animals turned into California dudes also, though not the original line-up.
oldswede

Dear Joe: Don't let the door hit your ass on the way out!

the Byrds were quoting the Bibile... the song was adapted entirely from the Book of Ecclesiastes... read a book

I'm reading a book right now, called "How To Be An Obnoxious Asshole", by Anonymous.

Would you autograph it for me? Sheesh!

Bob, why are you being so civil to the anonymohole? He's too self-absorbed to bother to read your post in full, especially the third paragraph.
He also doesn't know the difference between singing a song written by someone else and quoting something. Seeger, the author of the song, paraphrased the Bible. This is not the same as quoting.
Read a dictionary, anonymohole.
oldswede

Nah, it's not worth the effort. You don't need a sledgehammer to swat a fly.