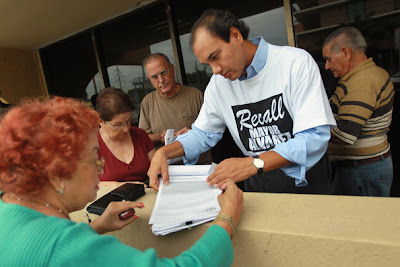 (photo via Zimbio.com)
A growing sentiment of "buyer's remorse" is sweeping the nation, at least in regard to Republican lawmakers.

In Miami-Dade, Mayor Carlos Alvarez lost his seat because of a large part of the voting population among the 2.5 million he represents.

From The Christian Science Monitor:

According to a Miami Herald poll, 67 percent of residents wanted Alvarez out, mainly because he raised property taxes for two-fifths of the county's homeowners by 13 percent, while increasing pay and unfreezing some benefits for public-sector employees. The unemployment rate in Miami-Dade County is 12 percent.

With such sky-high unemployment, as well as crashing tax revenues, "Miami is a microcosm of what may also be the continuing national mood of anger that the economy and high unemployment reverberated," Fernand Amandi, a Miami political analyst, told the Financial Times.

The recall was largely orchestrated by former Philadelphia Eagles owner Norman Braman and supported by Sen. Marco Rubio (R) of Florida, a tea party favorite. This is definitely a case of a Republican lawmaker "not being conservative enough" for his party's extreme right wing.

In Wisconsin, thousands continue to protest Gov. Scott Walker's blatant efforts to strip unions of their collective bargaining rights. The recall efforts for many of the GOP senators is well underway, although because of Wisconsin law, Walker himself is immune from recall until he's served a full year in office.

That doesn't mean we won't see additional efforts to collect the requisite signatures to force a special election as soon as he's eligible, but the question may arise as to when the signatures must be collected in order to qualify.

Governor Walker has said his bill, signed last week, is a step toward making the state budget solvent, but critics say it's an attack on Democrats, who count unions as a major constituency.

As of Monday, they have collected 45% of the signatures required to challenge the eight Wisconsin senators subject to recall.
Posted by CT Bob at 3/16/2011 12:14:00 PM

Actually, the results of the vote (after all precincts issued official results) had Alvarez losing 88% to 12%.

Thanks Bob. I didn't have a lot of time to fact check this one.

I doubt many here want to read anything from outside the echo chamber, but just in-case I have underestimated you:

Gov Scott walker in his own words, in the Washington Post.

The big difference, which you apparently choose to ignore, is that the Federal Govt. negotiates with those unions under the existing agreement, and they adjust their benefits and compensation accordingly.

In Wisconsin, Walker is taking away rights from the union that the state government had agreed to, while making it impossible for them to negotiate their wages, effectively taking back their rights.

Everything else is just Walker's attempt to whitewash the theft.

Yes, the state legislators had "agreed to" accept financial and political bribes from the unions. This incestuous relationship between management (elected Democrats) who are supposed to represent the taxpayers, and the unions who bribe their own management (elected Democrats) with donations and political support must end. It is corruption, pure and simple. More power to private unions, but public unions are a blight on democracy.

I hope we have more politicians who are brave enough to represent the masses of people who want them to resist the regressive tax hikes on food, clothing, wages, gasoline, haircuts, etc.. Its time for ordinary citizens to fight government/public union corruption and the growing political class. These government and union elites need to come off the golf courses and deal on behalf of the public they serve, not each other.

Anonymous said, "These government and union elites need to come off the golf courses and deal on behalf of the public they serve, not each other."

You won't find many union folks golfing on the golf courses with Democrats, but you will find Speaker of the House, John Boehner, golfing with his Corporate Fat Cat contributors. Before he became Speaker, Boehner golfed 119 times a year and used that golfing time to cozy up to the corporate Robber Barons who funded his and other Republican campaigns, so that they could get the power they needed to steal from working Americans our tax money.

The Great Republican Overreach of 2011 is starting to unravel the Great Con Artist Scam that began with Ronnie Reagan's ascent to the Presidency in 1980. Union members, the Reagan Democrats, who voted Republican because of social issues, like eliminating women's reproductive rights, or promoting unlimited access to guns for everyone, now realize that the Republicans really only care about supporting the wealthy elite. These former Reagan Democrats are finding guns and bullets don't make a good meal and are joining with their Progressive brothers and sisters in combating the class warfare that has been waged upon them Since Reagan's first term.

Goldman Sachs, Exxon Mobile, and many other corporations contribute more to Democrats than Republicans. And, if you really believe that the progressive political class isn't out golfing with AFSME, AFL-CIO, Teamsters fatcats and others you just don't want to know the truth. There's no law against being a dupe. Good luck with that.

Who does Obama golf with? He plays more than Bush.

Question authority doesn't only apply to Republicans. Look at the way our union officials live. What is the "Working Families Party"? The hundreds of State employees making more than $100K/year + gold plated benefits are not working class; they are party apparatchiks. Why do state employees vest in retirement after only 10 years? The head of Seasame street at taxpayer funded PBS makes $950K/year. How many AFSME and CEA officials make more than $300k/year? Its limos and first class all the way for the kissing cousins at public labor union offices and democrat party hq.

The 6th Fleet is on its way to earn its boss another Nobel Peace Prize. The first one was apparently for keeping Gitmo open and increasing the combat troop strength in Afghanistan while leaving 50,000 troops in Iraq. When you guys look in the mirror, is dupe or rube the better description?

Man, you are all over the place with your rants. You're starting to sound like a case of "Fox News overload".

I know right. They're all over huffpo.