Whose House? Our House! 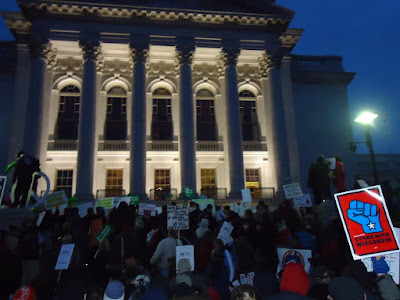 From the Wisconsin AFL-CIO:

This evening the court of law ruled that the Wisconsin State Capitol MUST remain open to its people. The Capitol is going to resume business hours and protesters will be asked to leave every night.

However, the Capitol doors will re-open at 8:00 am each and every morning so that Wisconsin residents can exercise their first amendment rights without undue interference from their Governor.

This ruling is a huge victory for Wisconsin and an enormous defeat for Gov. Scott Walker and his unconstitutional power grab. Despite Scott Walker's draconian attempts to take his 'baseball bat' to the First Amendment rights of those who disagree with his extreme agenda, he has failed yet again to silence the voices of the 74% of Wisconsinites who oppose his budget repair bill.

All the protesters want is to negotiate with Gov. Walker, but now it's a matter of ego with the dumb bastard. Scotty probably thinks himself the second coming of Ronald Reagan, when in fact he's nothing but a cheap imitation of a tough guy who is easily bullied by rich assholes like the Koch brothers.

Also, Gov. Walker has authorized the State Police to arrest the missing Democratic lawmakers for contempt. From the Wisconsin State Journal:

Senate Republicans Thursday ordered the forcible detention of their 14 Democratic colleagues, who fled the state two weeks ago to avoid a vote on Gov. Scott Walker's controversial budget repair bill.

"They have pushed us to the edge of a constitutional crisis," Senate Majority Leader Scott Fitzgerald, R-Juneau, said of the boycotting senators.

But it remained unclear Thursday whether the resolution and warrants seeking to force the senators back to the Capitol are legal. The state constitution prohibits the arrest of legislators while in session unless they're suspected of committing felonies, treason or breach of the peace.

All because the egotistical jackass doesn't want to appear to be weak by giving an inch of compromise.

I hope the protests go on until he gets recalled.

Maybe this comment belongs down on your "Walker Is A Boob' post, but when I went to "The Rude Pundit"s page today the photo of a protester's sign he has up nearly made me spit out my mouthful of Naragansett-

Ohio has already passed a similar law which declares striking a criminal offense, and no collective bargaining, including police and firefighters! Sorry, I don't recall the article, but one Republican who voted against it said something to the effect of, "imagine a 2012 election ad with a firefighter running out of a burning building, infant in hands." Pure gold for the Democrats. This will come back to bite these guys.

Apparently the protesters really want to negotiate Gov. Walker's election. Walker won the election and was completely transparent regarding his agenda if elected during the campaign. This is not a new tactic, I'm taking my ball and hiding in another state-because I lost, but is deplorable and an abdication of citizen rights, who elected Walker and should the demand that Senate Democrats do their constitutional duties.