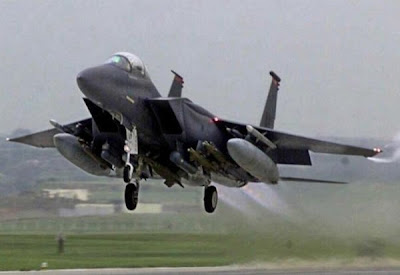 Today an American F-15 Strike Eagle jet crashed in Libya. The two pilots safely ejected, and as of this moment one has been recovered. (UPDATE: both pilots have been safely recovered.) 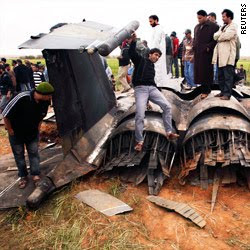 Ohio Congressman Dennis Kucinich issued a statement Friday calling for Congress to address the President's decision to attack Libya without first notifying nor getting consent from Congress. According to the US Constitution, Article 1, Section 8 clearly states that the United States Congress has the power to declare war. The President does not.

Saturday’s conference call was organized by Rep. John Larson (Conn.), chairman of the Democratic Caucus and the fourth-highest ranking party leader. Larson has called for Obama to seek congressional approval before committing the United States to any anti-Qadhafi military operation.

My biggest fear right now is that American military personnel may get captured or killed in Libya. The horrific looming specter of bodies being dragged through the streets of Tripoli may be enough to ignite calls among even those Obama-hating conservative lawmakers for the launching of a full-on Iraq-style war.

This is something we absolutely cannot afford. Hopefully they'll get this thing over quickly and get everyone safely out of there as soon as possible.
Posted by CT Bob at 3/22/2011 07:38:00 AM

Yeah! That for a fact!

I'll feel better once we get solid assurances about the level of our involvement, including an end date. Not holding my breathe...

I agree with our involvement, but feel it may have come a bit too late. I hope not. I just have a different view of why we're there.

Really? Different how? I'd like to hear your thoughts on this.

And have you made any plans to go back to Cairo yet?

As opposed to the asses who say this revolution in Libya was not "organic," I disagree. It was peaceful, until Kadafi (how DO you spell the guy's name?) came out after his umbrella presentation and decided to declare war on his own people. I'm a bit worried about this, but it seems the "rebels" (as they're now called) only took up arms to fight him, and he'd do anything (along with his sired leeches) to keep power. I agree with this, but wanted more support from the Arab League. Amr Moussa, head of the league wants to run for president of Egypt - he's bad news, from what I've read. All of the Arab League is made up of dictators, who are almost all in trouble. They don't like Kadhfi, but they didn't like Saddam either (though viewed him as a necessary evil to thwart Iran. - We did real well there huh?)

When Kadhafi talked of going house by house to get the demonstrators, it reminded me of my days in Abu Dhabi, when everyday the news was filled with reports of Algerians beheading their countrymen.

Libya does not provide oil to us, but to Italy and China (of course they abstained.) After reading and watching what happened in Egypt and Tunisia, this is a growing movement, and I think, regardless of the outcome we should support it. If not now, then when?

Cairo - My return is years away. I'm dependent on the company's okay, and it's going to be awhile. I just picked up our cat and dog two weeks ago at JFK. We had to leave them behind, and since it looked like I wouldn't be returning for quite some time, we decided to ship them back to the States (I demand frequent flier miles!)

Basically, I think it's the right thing to do. Boots on the ground - no. My support ends there.

I am dismayed that's nothings been said or done about Bahrain (Gulf home to our Sixth Fleet?) They've got hundreds of Saudi Tanks and some from the UAE, all sporting foreign army - Indian, Egyptian, Pakistani, Afghani - paid soldiers who won't blink twice about shooting innocent civilians. I'll say one thing - the Saudis are protective of their alcohol and whore filled weekends. As the Egyptians say, "We were tying our shoes while they were all still roaming the desert barefooted."

Wow. There's a lot to digest in your comment. It's always interesting to hear from you, and I appreciate you sharing your first-person insights on the region.

I hope that the uptick to all this is that the leaders in some of these nations realize it's better to institute some measure of democracy and give their people a say than to wait until the kettle boils over.

I'm glad you were reunited with your dog and cat. But shouldn't they get frequent "flea-er" miles? LOLZ!

BTW, and excellent read on what's happening in the Middle East can be downloaded from Foreign Policy website. It's an ebook titled: Revolution in the Arab World - http://www.foreignpolicy.com/ebooks/revolution_in_the_arab_world

You can buy it from Amazon, as well. They say they'll be updating it for free too.

They have very insightful articles that are up-to-date and their older ones (at least regarding Egypt) were prophetic.

Also, Sultan Qaboos (aka I love a purple dishdasha, but don't ask me why,) has instituted a few reforms to try to appease demonstrators. Not sure how that's going down, but he's considered somewhat of a renaissance man in the ME. I would keep my eye on him, since he's probably ahead of the curve when it comes to reading the writing on the wall.

I wake up with the smell of napalm in the morning. (Remembering our last intervention in a civil war) I will support this, Obama's Grenada as soon as the MIC's entitlements in Iraq and Afghanistan are defunded.

Joe Biden -- "I want to make it clear. And I made it clear to the President that if he takes this nation to war without Congressional approval. I will make it my business to impeach him. That's a fact. That is a fact."

Obama received $884,000 from the oil and gas industry during his 2008 campaign alone, not including his major Wall Street financiers.

Dude, instead of bitching about Obama, tell me what brilliant thing YOU would do about Libya.

One thing is certain...if McCain got elected, we'd already have boots on the ground in Iran, Libya, and probably a half dozen other Muslim nations.

Stay out of it.

What does your theory about McCain have to do with a discussion about events happening now and directed by this President? Its your blog, so you can change the topic if you want. I don't blame you for wanting to do so. Obama is a disaster.

What would Pres. H. Clinton be doing might make a more interesting dialog?

Because you're obviously a Republican, so it goes that you supported McCain. But because of your incessant anti-Obama rhetoric, you choose to be against everything the man does, regardless of whether you would agree to the decision to attack had a GOPer president made that decision. You're very easy to read, pal.

With respect, I'm glad you are able to see the difference in Obama's policies versus what McCain's might have been. Would they look like this:

“New rules allow investigators to hold domestic-terror suspects longer than others without giving them a Miranda warning, significantly expanding exceptions to the instructions that have governed the handling of criminal suspects for more than four decades. The move is one of the Obama administration’s most significant revisions to rules governing the investigation of terror suspects in the U.S. And it potentially opens a new political tussle over national security policy, as the administration marks another step back from pre-election criticism of unorthodox counterterror methods.”

I really do like your bog. I hope an alternate opinion is welcome. Thx

Being in a bog makes it easier to pee.

Damn that right hand of mine...I just noticed I cut off the end of my comment by hitting [ENTER] instead of finishing my ellipsis (the trolls might have to look that word up).;

"Being in a bog makes it easier to pee...on others; and it make it harder to see who did the peeing."

confused by your support, this war is smaller then Iraq, where sadam did horrible things to his people, but it is still a war> Bush went to congress and got 87% support. Obama and biden threatened bush with impeachment if he bombed iran without congressional support. There are dictators all over the globe killing people including Syria and we are not bombing Syria.Reading your support makes all your anti-Bush platforms as partisan rhetoric rather then based on morality. This action and the war in Iraq are either right or wrong, they can't be up to which party you belong to. You guys remind me of the Yankees redSox arguers, too blind to have a ration discusssion.

I will admit, way to the right of you but not on the right. Your blogs supporting this war are hypocritical. I don't support this war or the Iraqi war. This will end Obama's career, unless we find out later he was making nukes ready for terrorists.

Who cares what you think or say as long as you remain anonymous.

doc, is that what you think? Your just a party loyalist but have no moral backbone? You are too blind to see, if you support Obama's war, then you also support Bush's war. Remember the things your mother taught you ? two wrongs don't make a right>