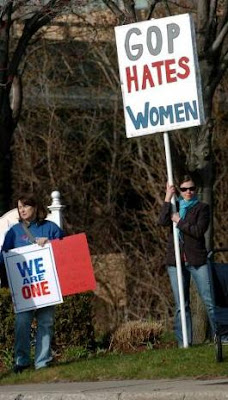 (Photo: Christian Abraham/Connecticut Post)
Women's activists were among the protesters at the Prescott Bush Awards Dinner in Stamford. House Speaker John Boehner was the featured guest at the annual GOP fundraiser.

During last week's budget wrangling on Capitol Hill, one of the items the Republicans sought to cut was funding for Planned Parenthood. This transparent attempt to push an anti-woman social agenda was successfully defeated by House Democrats, who didn't blink when faced with the possibility of the government shutting down over the issue.

Let me just be clear about one thing. I don't believe Republicans hate women, generally.

Rich women seem to get all the help they need. They have the options that money gives them. Even Bristol Palin, who was paid a quarter million dollars to be the most ironic spokeswoman imaginable, had all the options available to her. Even the option of hiring nannies to watch her illegitimate baby while she pranced through a season of a TV dance show.

Poor women don't have those options.