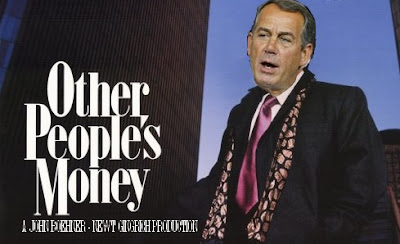 For a state that only receives 76 cents back out of every dollar we give the federal government, you'd think John Boehner would appreciate it.

But the treacherous fucker only wants to drop in, pick up a massive check, and then get the hell out of town as fast as possible. While the federal government is experiencing a budget disaster!

So it shouldn't surprise anyone that for the first time in the history of the CT GOP's annual Prescott Bush fundraiser, John Boehner has forbid any media from covering the event.

For what appears to be the first time in its 33-year history, Connecticut Republican Party’s annual Prescott Bush Awards Dinner Saturday will be closed to the media, and the reason is because U.S. House Speaker John Boehner wants it that way.

“The Speaker’s office requested that (closing the event to the media) and we’re complying with that request,” said state Republican Chairman Chris Healy. “That’s what they wanted, and that’s what they’ll get... It’s not my decision.”

Gee whiz Chris, thanks for sticking your neck out for the CT media! I can't imagine that this won't upset some of the more prominent local journalists out there (along with a rogue blogger or two!) Just wait 'til you hold a presser for something and nobody shows up!

I can't imagine Nancy Pelosi pulling anything like that!

So Boehner will swoop in, hit our ATM, take MORE cash out of our state, and leave without even bothering to say "thank you".

BTW I'm a bit ashamed of my use of the phrase "treacherous fucker" to describe our esteemed Speaker of the House.

I apologize to anyone I may have inadvertently offended with my use of the term "treacherous fucker" when referring to John Boehner, Speaker of the House.

And where's my goddamn Pulitzer already?

FRIDAY UPDATE: As of 2PM, there's still a major holding pattern on the budget because that treacherous fucker hates women so much he wants them all to die from cancer! He'd rather shut down the government than let women get cancer screenings. Because he thinks women are dirty and unclean and deserve anything bad that happens to them for tempting him to deviate from the path of righteousness and purity. Or something like that.
Posted by CT Bob at 4/07/2011 03:31:00 PM