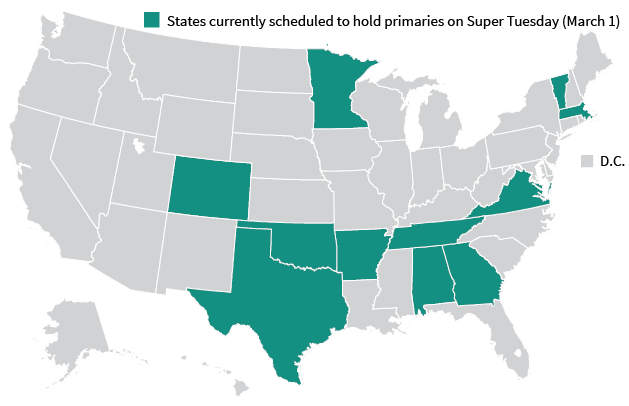 Maybe not so super, but pretty darned good anyway!

This should probably be called "Southern Tuesday", because there are contests in the following states today:

Now, I know that strictly speaking not all those states self-identify as "southern". But there's enough drawls in those places to qualify, if you ask me.

There are also a few "northern" states in today's contests:

All things considered, there will be roughly 700 delegates on the Democratic side decided tonight. That's about 1/4 all 2,382 delegates needed to wrap up the nomination.

On the Republican side, about 600 delegates are up for grabs, which is nearly half of the required 1,237 needed to win. So for Donald Trump and the other GOP candidates, tonight will go a long way towards making or breaking the competition.

Polls will start closing shortly, and I hope to have some results posted soon!