All I want for Thanksgiving is a recount

The biggest news of the last 24 hours is possible voting irregularities in some key swing states. 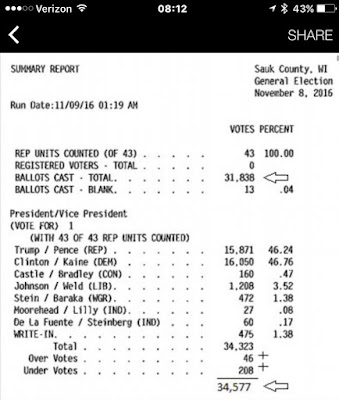 This is looking to be a very interesting couple of weeks coming up. The Electoral College (you know, those 538 people who REALLY elect our president) votes on December 19th. And there is growing concern that a significant number of Trump electors may jump ship and vote for Hillary.

Especially if the recounts actually happen, and we get results that don't agree with the current tally of electors.

I'm having a flashback to the disastrous 2000 election, when Gore v. Bush ended up with a vicious and contentious recount of stupid Florida, which eventually was decided when a judge ruled that the recount must be stopped and the results accepted.

This may not happen here, but enough people are concerned once again about the outcome of a vote that SHOULD be a fairly simple matter.

We need identically formatted paper ballots in all 50 states. Elections that include Federal office should be regulated by the Federal government. At least where ballots and ballot layout are concerned.

That way, we'll have an easier time of recounting votes if there's an issue.

Meanwhile, we'll see if there's a reasonable way to verify votes that were made on electronic voting machines. If the recounts actually happen, that is.