I've been around for long enough to know that this election is something big. 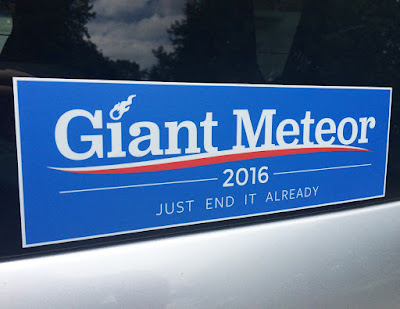 This is the PERFECT solution to all our nation's problems!

On election night, CT Joyce and me are going to be at ground zero! We'll be hanging out around the White House as the returns come in, and probably ducking into some local watering holes for a refreshing beverage or two. Like Shelly's Backroom, where a politically-minded citizen can have a smokey single-malt scotch while puffing on a decently-rated Maduro cigar, only to head back onto the streets and witness history happening.

History, in this case, will hopefully be a history-ending giant meteor that managed to slip by NASA radar and impact somewhere in the vicinity of 1600 Pennsylvania Avenue.

I'm not the only one who apparently likes this idea. Giant Meteor was polling quite well earlier this summer: 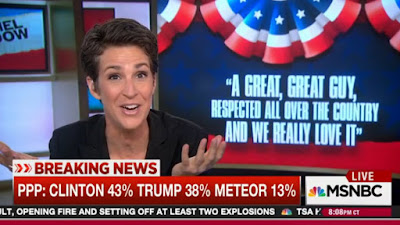 So yeah, one way or another, it's bound to be a memorable night!

I'll be live Tweeting from the scene, at least until the shock wave of the meteor impact obliterates all nearby cell towers.

Or until we have a new president declared.