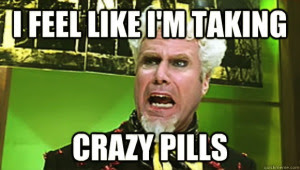 It's only 48 hours until the polls open on what history may refer to as "The Day America Gave Herself A Collective Lobotomy".

Or, it may someday be referred as "The Fucking Day We Finally Elected A Woman President".

Either way, we're in for a huge explosion of relief when it's all over, when there's nothing more anyone can do to decide who gets to run this fucked-up collection of over-excitable people largely dominated by the whims of giant corporations.

But what will we do to generate similar amounts of rage and fear? How will our bodies get over the daily physiological blasts of outrage-based adrenaline that we've become accustomed to because of mainstream media and everyone on the internet being just so goddamned ubiquitous?

I worry that there will be a massive letdown in the days following the election, akin to the hangover one might feel after a 15-month bender. Which, let's be frank here, is exactly what the run-up to a presidential election tends to be.

I'm almost positive I will suffer from PTED, along with millions of Americans. Symptoms will include headache, nausea, muscle cramps in our thumbs as we endlessly refresh Twitter and Facebook on our phones when the volume of news drops to perhaps 10% of current doses, sleeplessness, loss of appetite, and a general feeling of lethargy and listlessness.

There may be a cure for this malady. It's called "Get The Fuck Away From Your Phone, TV, and Laptop, and Go Outside And Enjoy Nature Or Something Like That."

Because really, nature is a wonderful curative for all sorts of things. And whatever happens next, it's a good thing to take a minute to center yourself and appreciate the here and now.

(This has been a public service message from Zennecticut Bob)!