Nate Silver over at 538 Election Forecasts has the latest probabilities for the Presidential Race.

Basically, Donald Trump has a slightly better than one-in-three chance of becoming our next president.

Which means, I'm not going to get another decent nights sleep until Wednesday! 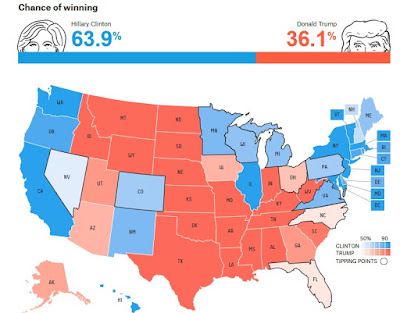 I think the early results from important states like Ohio and Pennsylvania are going to be an indication of what lies ahead on election night. The old saying, "As goes Ohio, goes the nation" has turned out to be right much more often than wrong.

Election Night is shaping up to be a long one. Most news sources won't release results from the east until after the west coast polls close, at 11PM Washington D.C. Time. We're planning on being near the White House, the Washington Post, and the W Hotel while the results are being reported. I'll have a cigar and probably a flask of some single malt with me to help ward off the evening chill as we move to the early hours of the morning. We're at an AirBnb about 10 minutes walk from the area, so we can even nip back in and watch some TV in the peace and quiet of an apartment.

Four days out, there's still time for a juicy bombshell to be lobbed by a rogue FBI director or a conservative news network. We'll see what happens during the next 80 or so hours until the polls open in the East!