Why is a map with targets so bad?

Over the last 24 hours, I've heard countless Sarah Palin apologists saying her map with the target graphics pointed at twenty specific House seats (including that occupied by the gravely injured Gabby Giffords) is nothing but a metaphor.

If a Detroit Muslim put a map on the web w/crosshairs on 20 pols, then 1 of them got shot, where would he b sitting right now? Just asking.

Even if NONE of them got shot, I'm sure the guy who posted it would be subject to a vigorous FBI interrogation at the very least.

I wonder if it would still be considered a "metaphor" if a high school student placed targets on a photo of 20 of her classmates? Never mind if anyone got shot, that would be MORE than enough to get a student expelled.

And yet, for some reason the nation allows (and, to some extent, largely encourages; at least on the right) a vicious dingbat like Sarah Palin to allude to violent actions in a political context. It staggers the imagination. 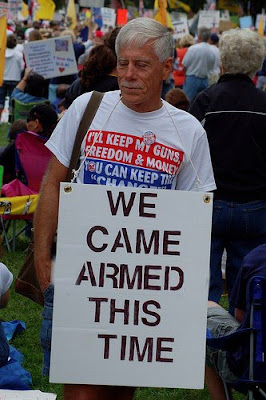 (jokingly photoshopped Teabagger via Fark.com)
As a blogger, I'm hyper-aware of the imagery I draw upon. I realize that something I say even in a totally joking manner may be misconstrued as an attack. I'm very careful to make my point with logic and judgment.

Or, since logic isn't one of my stronger points, most other times I make do with outright mockery and snark.

But I never even hint at any sort of violent action, even in the broadest sense of a joke. I simply don't do it. I haven't even suggested that certain people might be better off if a giant 16-ton weight were dropped on top of them, no matter HOW silly the image might be. 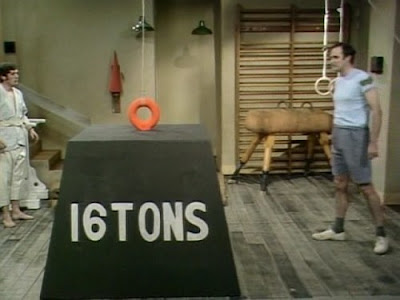 So it just might be time to look into the rhetoric that some people use that might be construed as inciting a violent act.

Because, it's never "cool" to "joke" about killing someone...

What's the deal with those impossibly long urls, dude? How about a bit of a description or something? I wouldn't go into your house and just plaster all sorts of inscrutable urls all over the place. Show a little respect, OK? Peace.

My apologies. Will do next time. Peace.

No problem and thanks for responding, but just a bit of explanation would be appreciated. That's a lot to copy and paste without any idea what it contains.

Sorry if I came off sounding a bit cranky; I get that way sometimes!

Self-Scripting is Cool.
Anonymosity is Not Cool.
Trend towards The Cool!

In the mean time we should all do our part. We should all call Fox News and tell them it is time for them to take responsibility for what they have created. Call numerous times. Tie up their phones. Hit their pocketbooks. That is all they understand anyway. It is outrageous that they support these purveyors of vitriolic babble.
Then contact the advertisers and let them know under no certain terms - you will NOT PURCHASE their products if they advertise for Beck or Limbaugh. What they have done to this country is criminal.
Then call the NRA and ask to talk with Wayne LaPierre and then tell him you are calling to complain about their policies. If they won’t let you through asked to talk to a staff person in charge of programs or membership or whatever. Be creative. It is time for a change. Tie up their phones. The gun laws we have on the books are obscene.

And MSNBC and CNN?

Anyone else find it creepy that new standard what we may and may not say is: How will it affect the behavior of an obviously crazy person who may or may not hear it?

Some quick facts, which should be heeded by the bombastic hot-heads on both the left and the right fringes:

1. Implying falsely that a person is a traitor to his or her oath of allegiance to the US Constitution is DEFAMATION and is not protected free speech.

2. Making indirect hints that violence should be employed to remove the clear and present danger perceived is ASSAULT.

3. When a person becomes aware of plans to commit a crime, but does nothing to prevent that crime, that person is part of the CONSPIRACY.

Whenever anyone loosely uses such words as "socialist", Nazi", and so on, one is being irresponsibly hyperbolic...and this hyperbole invites the very results as were seen in Tucson this past weekend.

For those obtuse fools who feel this is overstating the effects of overblown rhetoric, I would instruct you to listen to the surviving family members of any bullied kid who committed suicide, about the dangerous power of words on the foolish or deranged.

Our words have great power: the power to inspire (when used by a Churchill, a Kennedy, or a Reagan; to entertain (as by Shakespeare, by John Huston, or by John Cleese)...or to attack (when wielded by a Hitler, a Stalin, or any future demagogue).

Am I the only one who noticed that our "anonymous" trolls failed to respond to my previous comment?

Or is it remotely possible that the speech made by the President of the UNITED States of America chastised all of us - left and right - to speak, type, and act like adults?