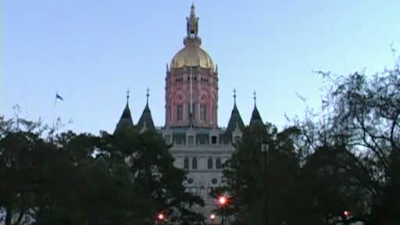 In Christopher Keating's article on CapitolWatch Blog, he examines some of what one union is discussing with their members in regards to Governor Malloy's proposed budget cuts.

The closed-door state union negotiations have been wrapped in a shroud of secrecy as Gov. Dannel P. Malloy is seeking $2 billion in savings from the state employee unions that have a benefit contract that does not expire until 2017.

But an internal questionnaire from one union provides a glimpse of the types of wage, benefit, and retirement issues that are being discussed behind closed doors.

The questionnaire asks employees from the Administrative and Residual Union to cite which concession would be so objectionable that it would prompt them to vote against an overall union concession agreement. The list of 11 possibilities includes similar points that have been mentioned publicly by Malloy and are likely to be crucial to the talks.

The first question asks, "Are you willing to make some concessions to avoid layoffs?''

Governor Malloy is faced with the daunting task of trying to balance a budget that is victim to both years of poor leadership and a major economic downturn. This is likely why former governor Jodi Rell chose not to run for reelection, despite enjoying unprecedented (and, in my opinion, undeserved) popularity that would have enabled her to almost definitely ease into another term.

But, when the going looked like it was gonna get tough, Rell decided to split.

Malloy deserves to be commended for his eagerness to take on this mess, and regardless of the outcome, we should all keep in mind that it's an impossible task to balance a budget of this magnitude while keeping everyone happy.

Hey, what happened to the earlier photo? It was interesting, and I always wondered what those little statues near the top looked like!

Although my Gay friends would certainly prefer the one you substituted. It even has a turgid reddish look to it... I know I should be commenting on the latest wave of "union-busting, " but I just couldn't resist.

All around the towns and cities of CT - in fact all around our country - these are tough calls being made by elected officials and their employees.

I'll leave aside the obvious fact that the public sector has now been caught up in the vicious trend that private-sector workers have seen since the 1980's.

The main point I have is this: unlike the governments of Wisconsin and Ohio (and - to a point - New York)...and unlike private-sector employers, Connecticut has entered into a dialogue with their work staff, and have not ruled out pain being equally spread out amongst all.

Connecticut has some major pain a-coming, that's for sure. But that pain will be eased if we know we are all sharing it.

LZ: the earlier pic was from something online that I forgot where I got it. But it was too big for the page, and I didn't own it anyway, so since I could attribute it I wanted to use one of my own.

I had this frame-cap from a video I shot up in Hartford right before the marathon in October, so I decided to use it.

And I can't believe you noticed it! LOL!

WH Bob: yeah, the pain is lessened when it gets spread around. Which is why is pains me terribly to see Obama continue the ridiculous Bush-era tax cuts for two more years when it's likely to never get repealed.

All those rich bastards made untold millions during the Clinton years when the taxes were reasonably higher. Now they're making billions, and they don't want to pay their fair share!

And the GOP has done an amazing job of selling that bullshit story to the majority of dumb middle Americans who will absolutely be the very ones having to pick up the slack!

I'll never stop being amazed by the stupidity of so many Americans!

It's a mutation of Einstein's definition of insanity: doing the same thing over and over, each time expecting the result you want.

Since 1870, we've heard the same failed argument that rich people and businesses create jobs (for those of you who either never made it to 10th grade History, or were asleep that week, try Googling this: laissez-faire; try to think of it as high school karma.)

Since 1870, those businesses who failed to survive were replaced by those who had a better business model...until they in turn were replaced.

Business has to be able to evolve naturally...but business has to be regulated for "the general welfare". When business gets too big to be governed, Teddy Roosevelt (a Republican President) had the right idea.