Today, for the first time in a very long time, I was given the opportunity to cast my vote for someone with whom I agree with philosophically pretty much across the board.

In 2008, I was disappointed when I never had the chance to vote for Dennis Kucinich, whom I always referred to as "the conscience of the Democratic Party". He dropped out of the primary race early on, after a poor showing in New Hampshire.

I ended up voting for a somewhat conservative Democrat in Connecticut's primary and again in November, who had an amazing amount of support and momentum. And while I've disagreed with a lot of things he's done in the last eight years, I feel that we still ended up with a better leader than his opponent.

This time around, the candidate who most clearly represents what I want for our nation is still in the race. And there's an admittedly slight chance that he might even somehow win the nomination.

And I got to vote for him. 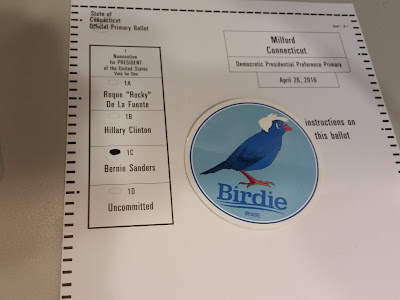 The thing to keep in mind is that even if Bernie Sanders doesn't win the nomination, it's important for Democrats to vote for him right up through the California primary two months from now. Because, with as many delegates as he'll have at the convention, Sanders will have a positive effect on Hillary Clinton's policies and stances on important issues.

That's what I'm talking about when I mention the conscience of the Democratic Party. We've strayed quite a bit from what we may one day become, but a candidate like Bernie Sanders is helping, in no minor way, to steer us back on the path of the righteous and the good.