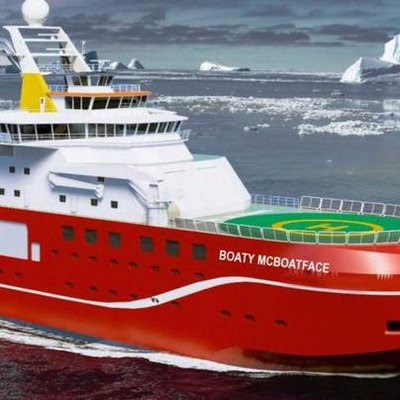 You've probably heard the story about the contest to name a research vessel in England.

If you haven't, here it is:

Last March, the U.K.’s National Environment Research Council opened a poll up to the public, asking that they come up with an “inspirational” title for its new ship. And the title they came up with was Boaty McBoatface—by a wide margin. It received over 124,000 votes, more than four times as much as the runner up, Poppy-Mai.

I don't think there's a single person in the whole world who doesn't think this is totally awesome!

Except, of course, this guy:

Unfortunately for voters, however, their chosen name probably won’t make it onto the ship.

“You won’t be surprised to know that we want something that fits the mission and captures the spirit of scientific endeavor,” U.K. science minister Jo Johnson told the Telegraph, suggesting that ministers won’t endorse the winning name.

Ohhhhh, I get it!

A small group of people are given a special status, above and beyond the wishes of the voting public. They have the power to overturn the will of the people and select whatever THEY deem appropriate!

And this is the reason I absolutely HATE that the Democratic Party has that stupid super-delegate system!
Posted by CT Bob at 4/29/2016 03:44:00 PM