Lieberman seems eager for "next war"

In his all-too-familiar role of cheerleading for war, Sen. Joe Lieberman stated Sunday that the US needs to become involved in Yemen immediately. Speaking on "Fox News Sunday" (gee, what a surprise) Lieberman said that a government official in the Yemeni capital told him that:

"Iraq was yesterday's war, Afghanistan is today's war. If we don't act preemptively, Yemen will be tomorrow's war."

The independent senator is what is commonly referred to as a "professional chickenhawk", who unfailingly votes to send others to fight and die in wars that he could never seem to bring himself to participate in. Lieberman received student deferments from 1961 through 1967 while at Yale and Yale Law School. After finishing law school, he received a parental deferment with his wife pregnant.

Today many of the soldiers currently dying in places like Iraq and Afghanistan are leaving small children behind. Fortunately for Joe, he never joined the military, so this wasn't a worry for him. What a lucky guy.

However, when it comes to cheerleading for war, we can count on Joe to always be right there, enthusiastically shaking his pom-poms. He reminds me of another cheerleader: 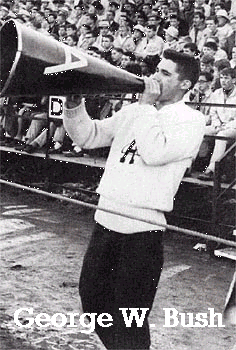 My impression is that the American people ARE being prepped for yet another pre-emptive, expensive, illegal, immoral war - but in Iran.

Iran is being sold hard (by the Obama people AND by the ever-compliant popular press) as the New Threat to Civilization Everywhere. Forget Saddam, forget Ortega, forget all the rest.... Soon our new Just War Doctrine will mean we just HAVE to bomb Iran.

Oh - and Joe will cheer louder than most!