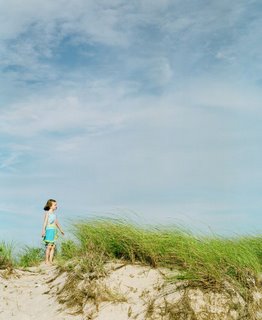 Kirby here. When I couldn't sleep in the week leading up to the first anniversary of the 9/11 attacks, I got out of bed one night and wrote this in about 15 minutes. This is what it felt like four years ago. At the end, I'll offer some thoughts on this fifth anniversary.

The City of the Sky

The sky today was blue. Too blue. Too achingly, beautifully blue. In this post-Labor Day September when the haze and humidity and smog of summer are gone, you can look at the sky and see a palette of shades of blue visible only a few days a year.

I looked at the sky a lot this summer. My summer was filled with markers – the next thing to do. First, it was finishing a manuscript. Then a major bout of dental work. Then Fourth of July fireworks that filled the night sky as I sat in the backyard holding hands with my husband. Then our first vacation on idyllic Nantucket island. Then the Labor Day weekend. Then -- nothing. Nothing to block that inexorable march to September 11, 2002. I am looking down a long tunnel toward that day at the end and nothing between now and then any more.

When I took the train from Connecticut to the city (and when you grow up in the New York suburbs, it is always just "the city") two days after Labor Day, it was a rainy, misty morning. I was incredibly grateful for that gray sky. I didn’t think I could bear looking out the window expectantly as the train winds through Queens and the skyline comes into view if it was another beautifully blue September morning.

When I was a young girl from the suburbs, the Empire State Building was the focus of the dreams and excitement that the city represented. When we took school field trips to the city, we craned our necks until we saw it. That art deco landmark was New York. When I returned as an adult after being away at college and moving to Connecticut, instead of a school bus, I took the train. And, with my maturity, the focus on the skyline shifted downtown to the two pillars. They weren’t charming, they weren’t part of a child’s dream. They meant business, opportunity, and instead, represented the thoughts, hopes and dreams of adults.

The attacks came from the sky. Everyone looked skyward to see what happened. And when the unspeakable occurred, the sky was obliterated as a reflection of our horror and disbelief. The events of the morning were so unbelievable that it was as if the beautiful post-Labor Day blue of the sky had to be erased. It didn’t belong anymore.

The sky continued to change that day. It was incredibly blue at 8:30. By 9:00 it was punctuated with black smoke as you looked south. By 10:30, it was black – for those who were downtown, there was no sky, no up, no down. It was just blackness. Then, it became lighter but the sky was replaced with the smoky haze we all moved through that day, wherever we were.

I first took the train back into the city the first week of October last year. As we came around the bend, and I scanned the skyline, the cleft downtown was unbearable to see. Tears filled my eyes. I saw the thoughts, hopes and dreams that were dashed. My trip to Ground Zero was in March. I wanted to go when the lights were on – the lights that replicated the towers and, yes, stretched into the night sky as far as the sky was high. I went near midnight, when it would be quiet, and empty of street merchants and tourists. While I was there, it was time to turn the lights off. All work stopped. The workers paused, turned toward the lights and reflected for a moment as the sky became black again. I cried again for the loss of those eternal towers that reached through the sky, all the way to heaven.

It is all about the sky. And when I heard Bruce Springsteen’s tribute to that day, The Rising, I sat completely mesmerized. For he, too, knew about the sky. His lyrics represent the amazing progression we have been through:

Sky of blackness and sorrow
Sky of love, sky of tears
Sky of glory and sadness
Sky of mercy, sky of fear
Sky of memory and shadow
Sky of longing and emptiness
Sky of fullness, sky of blessed life

Elisabeth Kubler-Ross talked about stages of grief in concrete terms. In New York, the stages of grief, horror, loss, and eventually understanding are in the language of the sky. When I was in New York this week, I saw a sky of longing and emptiness. May we all one day be able to see a sky of fullness and blessed life. Then, the sky will not be too blue. It will not be achingly blue as it is this year. It will be a rich, blue palette of hope and joy as we fondly remember the ebbing summer and look forward to all the new beginnings September has represented since we started a new grade at school… before the steel gray sky of winter returns.

And this September, I can say that I see a sky full of fullness and blessed life. I will never be able to look at a stunningly beautifully blue sky and not think of that morning in September 2001. But, today I am filled with so much more hope. Today, a day just like that day, there is a crisp feel in the air with that sky -- but the hope comes from the patriotic Americans who are serving in our Armed Services, and those of us on the home front who have decided we are not going to be spectators in our democracy, but active participants who believe we can change America and restore its greatness worldwide. And, that's how to honor the memory of the people who died on that day -- get off the sidelines and get involved in what matters to you.

UPDATE: For an amazing timeline/chronology of events leading up to and after the 9/11 attacks, listing 2202 items beginning in Nov 1979, click here

Thank you Kirby, I think you captured beautifully what most of us are feeling today. I remember right after the first plane hit, when everyone was still thinking it was a small plane, getting into the elevator and one young man turned and asked if anyone had just heard the news and I said yes. He asked what floor the plane hit, and I said I believed the 82nd floor. He said his brother was working on 104st floor and everyone tried to reassure him that he'd be okay. It didn't turn out that way. Thereafter, every time when I would see this young man my heart would always feel the pain for his lost and for that "before moment" when we thought everything was going to be okay.

You know, Bob Schieffer was so eloquent in his commentary the following Sunday, when he said, "We will never forget September the eleventh. We must always try to remember September tenth."