Joe doesn't care WHERE his money comes from!

Mel Sembler, Republican fundraiser and child-torturer, has been enlisted by Joe Lieberman to help him raise Republican bucks. 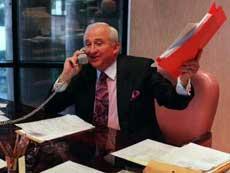 From Lindsay Beyerstein in this article at Fire Dog Lake:

This week, Joe Lieberman enlisted a Republican operative with a background in brainwashing and a problem with a penis pump.

Mel Sembler is a former RNC finance chairman and the chair Scooter Libby’s legal defense fund. The Florida real estate tycoon calls Dick Cheney a close friend. No doubt the bond between Sembler and the VP is strengthened by an optimism about the potential for torture to solve problems. If anything Sembler is even more optimistic than Cheney–he believes that torture can cure diseases like addiction.

Any principled Democrat would recoil from Sembler, but it gets worse. Sembler is also a self-styled drug treatment entrepreneur who founded Straight, Incorporated, a residential drug treatment program for teenagers.

Between 1976 and 1993, thousands of youth were routinely subjected to physical, emotional, and sexual abuse as part of Straight’s "confrontational" approach to treatment. Some inmates were held for years against their will. The program has been sued dozens of times for brutalizing inmates and some staff members faced criminal charges for their role in the abuse.

Sembler founded Straight after a congressional investigation determined that the last detox program he oversaw, The Seed, was using mind-control tactics similar to those used by North Koreans during the Cold War.

The Seed was a mind-control cult, but it was positively benign compared to Straight.

Bob, Christie pointed out in another thread that Sembler isn't the kind of guy who does something for nothing in return. Think Lieberman is making some Faustian bargain? It's kind of unsettling.