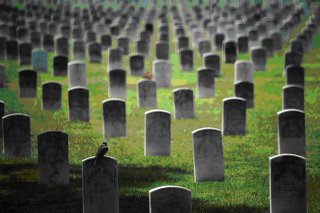 Not for the first time, war that was started to answer death has resulted in at least as much death for the country that was first attacked, quite apart from the higher numbers of enemy and civilians killed.

The difference is the lack of a draft.

If there was a draft today, there'd be a few more rich kids who couldn't work out a deferment and would have had to go; unlike Lieberman who, although he was given notice of his induction and could have done the honorable thing, chose to exercise his college loophole and get a shitload of deferments.

That's why it pisses me off that people like Joe Lieberman will happily send people off to fight and die, and not do a single goddamned thing to stop it.

And for the record, I still feel that the Afghan war was a just cause and reasonable reaction to 9/11.

But to have so many of our troops and resources pulled out of Afghanistan to attack Iraq has resulted in a lot more American deaths than was necessary, in both countries.

Not to mention the untold thousands of innocent Iraqi civilians who lost their lives because of the failures of our leaders.

I can't believe ONLY around 2/3 of our citizens feel that Iraq was a mistake. Are there really that many undocumented morons wandering about?

if you recall, saddam hussein was killing innocent people. he wasn't better than what's in iraq now.

So we're killing the innocents now.

Boy, does THAT make me sleep better at night.

way to misinterpret, bob. im saying that iraq was messed up then and its messed up now. as bad as it is, at least theres hope for democracy now.

I give you credit for persistance, anon. But it doesn't help your boy escape his guilt for the mess that killed 2,600 Americans since 2003.

Iraq may have had problems before we invaded, but if we had saner leadership there's be a bunch of kids who will get to know their fathers and mothers as they grow up that will only know them from photographs and letters now.

Joe is so in favor of war, yet he and his entire family sits in the womb of safety, insulated by their power and position. And I'm the hypocrite. heh.