A letter to Joe 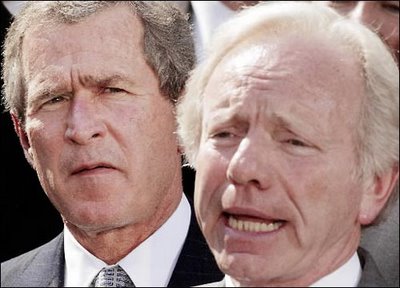 On the eve of Senator Lieberman's semi-ballyhooed "major speech" on Iraq, the National Intelligence Estimate report is purported to contain significant evidence that our nation has been made LESS SAFE because of the invasion and occupation of Iraq.

I repeat: We're LESS SAFE because of Bush and Lieberman's senseless war! And Lieberman DOES own responsibility, because of his continued support of the war. It's one thing if he voted for it and then realized it was a mistake and spoke out against it.

It's quite another to be a relentless apologist for Bush's failed presidency and sucking up to the warmongers.

There's no way to soften this conclusion, regardless of whatever Joe Lieberman says in his carefully prepared and focus-group tested speech.

And somebody please tell my why the headline on Joe's calendar entry say this:

Event - Joe delivers a major speech on the future of Iraq.

But the description of the event says: Senator Lieberman has been proud to stand up for Connecticut's veterans and be a voice for them in Washington for the past 18 years. Please come and show your support for him by enlisting in Vets for Joe and standing with him as he delivers an important speech on the future of Iraq and America's mission there.

To me, it looks like Joe is deliberately confusing the veteran's issues with the ongoing war in Iraq.

Here's a newsflash for ya, Joe - We can ALL see through your bullshit!

The voters in this state are NOT that stupid, regardless of your adviser's thoughts on the value of "low-information voters" (read: stupid people will vote for Joe).

Today Ned Lamont wrote a letter to Joe Lieberman that contains this statement:

Let me put this news in terms that you can clearly understand: Our own intelligence agencies now confirm that the Iraq War is undermining America’s security and credibility at our nation’s peril.

Is THAT plain enough for ya, Joe?

It's 9AM on Monday. Joe's website announced late last week that they would make Joe's speech on Iraq available well before he gives it, at 11:45AM up in East Hampton.

I guess they're going through a desparate last-minute rewrite because of the damning NIE report that was leaked over the weekend.

No doubt the speech will be about the critical importance of ensuring our safety by getting OUT of Iraq. Heh.