It's All About Our Service Members 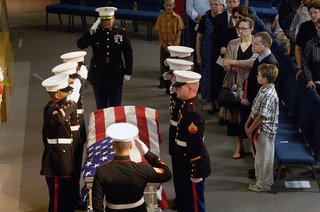 We've lost another. Remember the name Philip Johnson (L) who died Sunday in Iraq. We learned of his death yesterday, while friends, family and a grateful state mourned the loss of Jordan Pierson (R), Milford's son who also died in Iraq and will be buried at Arlington tomorrow. Philip was just 19 -- he had finished boot camp this summer, and deployed to Iraq. We mourn their loss and pray for their families and loved ones. Through August 29, these two young men join 2.945 men and women who have given their lives in Iraq & Afghanistan.

Look at Philip's face. This is why I am opposed to the war. He should be having fun back here in CT being a kid, learning about life and love, and feeling the beginning of the crisp nights that welcome autumn, the most beautiful time in New England. He should have the chance to fall in love, build a family and be the best dad in Enfield. But no.

One of my former students graduated from high school in June and went off to basic training in the Air Force a few weeks later. He is a wonderful young man, with incredible gifts. Every time I read about another service member who died, I think of that student, because every one of these men and women leave a gaping hole in the community they will never return to.

Clearly, there are good men and women who believe the war in Iraq is essential to keeping America safe, and there are those of us who don't. We can still respect each other and agree to disagree civilly. However, no one can accuse us of not caring about or supporting the troops. Wanting the Guard back home where they can protect their neighbors and help disaster relief is our goal -- to strengthen the homeland.

We are furious when we learn that Iraq vets are homeless because their benefits are so poor. It outrages us when we hear about families buying protective gear for their soldiers because our government does not provide it. Our fighting men and women are the best, and they deserve the best possible equipment, supplies and support from this government. How dare Rumsfeld say about our troops that he went to war with the soldiers he had, not the ones he wanted!

Veterans of Iraq and other wars are on different sides of the debate. That's a healthy thing for our democracy. But, to suggest that people who oppose this war and this administration's policies are somehow not patriotic is beyond the pale. For, in fact, it is our patriotism that drives us.
Posted by Kirby at 9/05/2006 10:43:00 AM