A friend of mine is on the Joe2006 email list, and today they sent him this happy little missive. Read and enjoy:

Dear Lieberman Supporter (actually, they used his real first name, but I don't want to reveal it here... 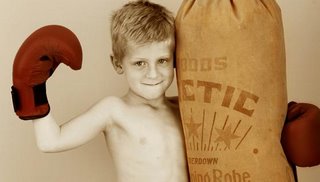 This coming week Round Two of our campaign begins. We hope you have your gloves on, because our Team Connecticut has a tough fight ahead of us, and we need your help more than ever.

Holy shit, Joe's people are getting mighty belligerent. I hope the Lieberkids don't take those words too seriously; I have visions of gangs full of paid teenaged hooligans showing up at public campaign events with nun-chucks and ninja masks!

Here are a just a few ways you can make a difference right from the get-go. 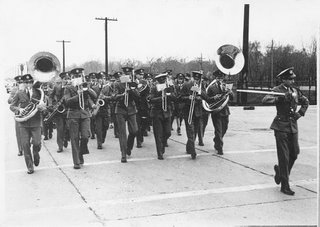 On Monday, September 4th I will be marching in the state's biggest Labor Day parade in Newtown with a group of local supporters. If you are free that day, we invite you to stand with us and show everyone that this campaign is about people, not politics.

We will begin marching at 10:00am. If you are interested, please call (860) 983-9035 or email events@joe2006.com for more information about where we'll be assembling. I look forward to seeing you out there.

Joe Lieberman was invited every year for the last nine years, yet he's only bothered to go to the parade ONE TIME; and that was when he was involved in his doomed run for the White House.

Only after he is disinvited by the Newtown DTC, who think he's being disingenuous by not abiding by the will of the voters in the primary, suddenly it's the most important thing in the world for him to attend.

Oh yeah, this is all about "people, not politics." Right!

On Tuesday, September 5th we will be officially kicking off the fall campaign with the launch of 'Joe's Doors and Diners Tour' in Waterbury. We welcome you to join us for this exciting event at the Bank Street Grille (70 Bank Street) at 12 noon.

Wow, that SOUNDS real exciting. Remind me to take a day off from work for THAT.

To reach as many people as possible, we will be organizing an army of volunteers to knock on doors in your own neighborhoods. If you would like to join 'Joe's Door to Door Corps', please visit www.Joe2006.com on Tuesday, September 5th to sign up. 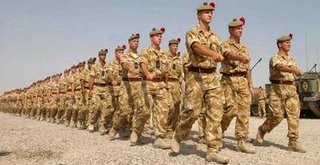 Listen to those words, "army of volunteers", "Corps"...the brave terminology of the true Chickenhawk.

Because along with our new tour, we will be launching our new and improved website (www.Joe2006.com) on Tuesday as well.

We appreciate your patience as we substantially upgraded the site's security and functionality. And we are confident you will find the un-hacked version worth the wait.

The cavalcade of lies and slander continues to pour out of the Lieberman Campaign! How long are they going to stick with that lame fiction? Maybe you people should own up to the fact that your campaign has always been egregiously incompetent when it comes to utilizing the Internet, and you were using a cheap webspace provider that was quickly swamped on Primary Day and cut you off for overuse.

One of the first things you will notice is that we have added our own blog. That's a place you can find out the latest scoop on the campaign, in real time. Joe's Blog will also be a place you can actively participate in the campaign debate and make your voice heard. So starting Tuesday, we invite you to log-in at www.Joe2006.com and sound off any time you want.

Golly, that sounds like fun! I can't wait to "actively participate in the campaign debate and make my voice heard."

We expect our opponents to pull more than a few dirty punches in the coming months.

More Lies! You're lying. You're a big fat Liar! Hey everybody, look at the LIAR! Stop Lying, you Lying Liars!!!

Help us fight back by making any kind of contribution you can. In the meantime, thanks again for your continued support. We are off to a great start for Round Two and with your help, we are going to have a knockout November.

Again with the fighting references! I guess when you abandon the Democratic process and ignore the will of the voters, the next logical step is to threaten to beat up your opposition. The implication is very clear.

And I wouldn't doubt that some of your weaker-minded supporters will take those words to heart.

Since Joe's name appears on the bottom of this campaign email, we have to assume these are his words.

Actually, there's no doubt in my mind that the guy who skated on Vietnam with 5 draft deferments yet voted to send America's youth to a wrongful war absolutely wrote these words.
Posted by CT Bob at 9/02/2006 07:16:00 PM

Sweet. They are planning to have a blog. As a Democrat I can't wait to let them know what I think they are doing to my party.

Yes anon, I'm sure there are plenty of voters in general (not just Democrats, Republicans, and Party of One-ers,) who will be grateful for the opportunity to "actively participate in the campaign debate and make their voice heard."

Speaking for myself, I'm not planning on participating in Joe's version of on-line "democracy" (remember, I have this blog where I get to speak my mind, and I'm sure Joe's people read it regularly); but I wouldn't let that stop any of YOU from telling Joe exactly how you feel.

I'm sure we'll see some interesting comments. I can't WAIT for Tuesday!

Does anyone actually believe that they will truly allow comment from real people? Come on! Joe's entitled to this seat without having to be bothered by those dirty citizens!!!! As for all the war metaphors, it's sick for a man who has voted for and repeatedly encourages the people that have sent our people off to die in war.
It infuriates me that this is what Joe thinks is a war. He is so out of touch.
UptownNYChick