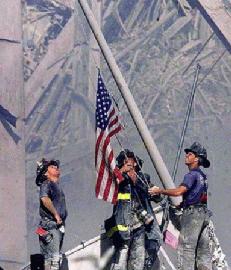 On the 5th anniversary of the September 11th attacks, Democratic Nominee for Senate Ned Lamont issued the following statement:

Five years ago today, our nation was brutally attacked by enemies that seek to destroy our country and the democratic principles that make us strong. We will never forget the Americans that died that day, including 152 from Connecticut. Throughout our state and country, we were all touched by the great loss of life and enormous tragedy.

In the days that followed, we came together as Americans in unity and purpose to help the families, and the nation, heal and recover. America was never stronger or more unified.

On the fifth anniversary of that tragic day, we must remember those we lost with great sadness and resolve. We must also renew our sense of unity and purpose in supporting each other, defeating our enemies and saluting our brave men and women who fight for our freedoms and security abroad.
Posted by CT Bob at 9/11/2006 07:20:00 PM

Hint, The Brutal Attackers are in the whitehouse.

Notice that he used Joe's new attempt at a catch phrase, "unity and purpose," twice?

Now, what can we do to get Mr. Lamont to spell that out, because it's time for him to take a position on Truth. His ties to the Banking oligarchy are worrisome...

What ties are those, Ratney?

Hi Bob, I'm no expert, and I definately am not a Lieberman supporter. I have an acquantance down in NYC who has worked to make the money trail his specialty, and I will discuss this with him and /or get him in touch with you. When I discussed this race with him he acted skeptical, let's find out the details, it's good insurance, if nothing else. Give me one day please.

Is it my ignorance or has the Lamont message kind of sunk into the media oblivion lately? I'd like to see some more clips of Ned online...